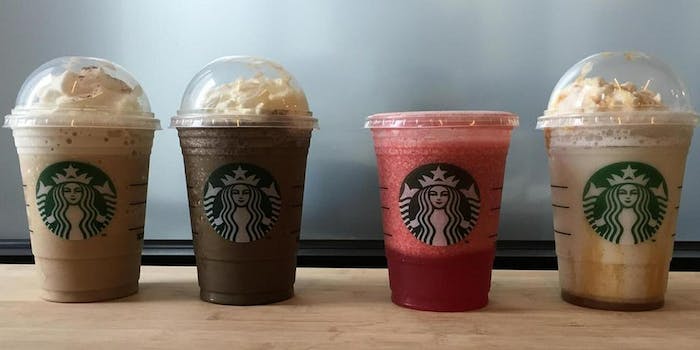 You can now order Starbucks via their app and pick it up in-store.

If you have been to any Starbucks ever, you know that there is always a line that will suck all of the good feelings right out of you. Luckily, there is now an app for that. Starting today, you can order and pay for your Orange Mocha Frappuccino through the app. A barista at the nearest location of one of the 7,400 Starbucks nationwide will have your drink(s) ready and waiting in minutes.

For the sake of journalism, the Daily Dot tried out the new feature by ordering some of the wildest drinks we could imagine. And then we gave them for free to our staff, of course.

Step 1: Download the app, available for iOS or Android devices. Step 2: Select the nearest Starbucks location and build your drink! The app allows you to add as many shots, syrups and sugars as you want, so we tried out some interesting combinations. Step 4: Walk to the Starbucks you selected.

Step 5: Skip the line, walk up to a barista and nicely ask for your order. Yeah, you read that right. We said skip the line. Step 6: Take a photo outside of Starbucks with your new drinks! (Okay, this step is optional.) Step 7: Bask in the love that your coworkers shower upon you when you return with their drinks. Look at all these caffeinated, productive people! There you have it! The new mobile order and pay feature of the Starbucks app worked like a dream for the Daily Dot staff. Now, we are going to nap under our desks following a major sugar crash.