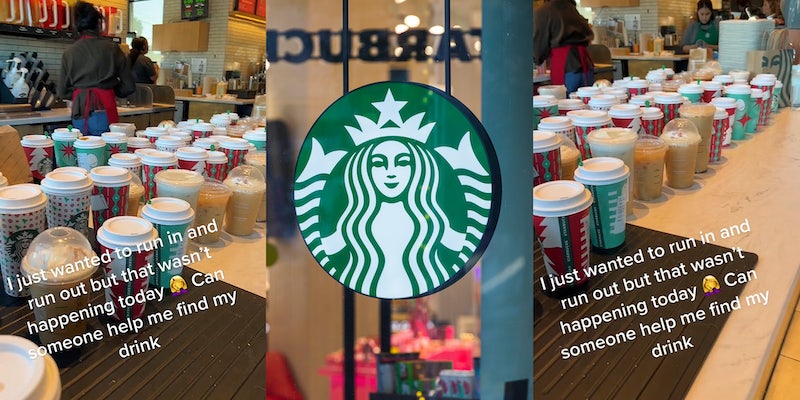 ‘Can someone please help me find my drink’: Customer loses drink in Starbucks mobile order pick-up section since there’s so many

‘Just take two that looks the best and leave.’

A TikToker who wanted to easily purchase and pick up their drink via Starbucks’ mobile ordering app was in for a rude awakening after entering the store.

A short video by user @karinakovacs2 (Karina) shows her inside the store staring at a sea of mobile orders. Most drinks are around the same size and are in Starbucks’ red holiday cups.

“I just wanted to run in and run out, but that wasn’t happening today,” the video’s text overlay reads. “Can someone help me find my drink?”

In the video caption, Karina doubled down on her annoyance: “Gotta love Starbucks.”

It’s not clear from the video what state or specific store Karina purchased her drinks from. It’s also not immediately clear whether she was eventually able to locate which beverage belonged to her.

Still, several commenters said it was ridiculous that there were so many cups for customers to sift through.

“Just take two that looks the best and leave,” reads the top-liked comment, with over 5,500 likes.

“That’s the definition of ridiculous. And, they still get paid the SAME as they would on a slower day,” a second user wrote. “Pay should be raised on days like these tbh.”

Other commenters noted that the employees were probably overworked.

“That’s too much,” another TikToker wrote. “They’re being overworked.”

The Daily Dot reached out to Karina via TikTok comment and to Starbucks via email.