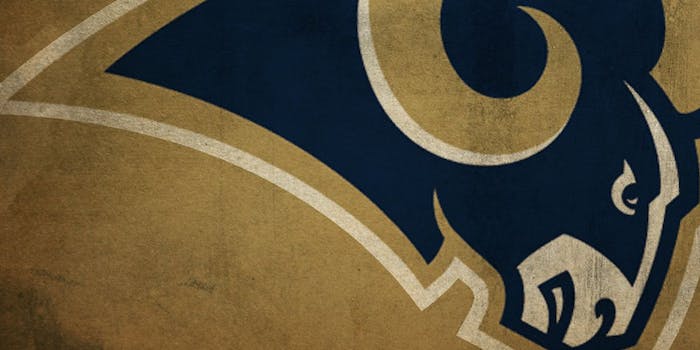 "We do believe it's possible to support our players' 1st Amendment rights and law enforcement as well."

Following a “hands up, don’t shoot” protest by five Rams before Sunday’s 52-0 win over the Oakland Raiders Sunday, and following calls from the St. Louis police for a public apology over the gesture, the Rams brass is standing behind its players.

Rams COO Kevin Demoff: "We do believe it's possible to support our players' 1st Amendment rights and law enforcement as well."

This despite original reports to the contrary. On Monday, Rams Vice President of Football Operations Kevin Demoff called St. Louis County Police Chief Jon Belmar. The St. Louis Post-Dispatch reported it was to apologize, and obtained an email that Belmar sent to his staff following his conversation with Demoff.

Members of the Department,

I received a very nice call this morning from Mr. Kevin Demoff of the St. Louis Rams who wanted to take the opportunity to apologize to our department on behalf of the Rams for the “Hands Up” gesture that some players took the field with yesterday.

Mr. Demoff clearly regretted that any members of the Ram’s [sic] organization would act in a way that minimized the outstanding work that police officers and departments carry out each and every day. My impression of the call was that it was heartfelt and I assured him that I would share it with my staff.

Thank you for your hard work, … one night to go.

“Later in the afternoon I had a positive meeting with Chief Dotson, Jeff Roorda, and Gabe Crocker at St. Louis city police headquarters to discuss with them how the Rams’ organization and law enforcement could build upon the positive relationship we already have. We began a good dialogue but recognize there is work to be done to strengthen our relationship… In none of these conversations did I apologize for our players’ actions. I did say in each conversation that I regretted any offense their officers may have taken. We do believe it is possible to both support our players’ First Amendment rights and support the efforts of local law enforcement as our community begins the process of healing… Chief Belmar’s assertion that our conversation was heartfelt is accurate, and I would characterize our conversation as productive. Our organization wants to find ways to use football to bring our community together.”

Apology: "expression of regret for not being able to do something"@kdemoff: "I regretted any offense their officers may have taken."

For his part, Rams head coach Jeff Fisher maintains that the players involved—basically the entire receiving corps. (Stedman Bailey, Kenny Britt, Tavon Austin, Chris Givens, Jared Cook) plus running back Tre Mason who did not perform the pregame gesture but celebrated a score with it—would not be disciplined by the team.

Photo via Charlie Lyons-Purdue/Flickr (CC BY 2.0)