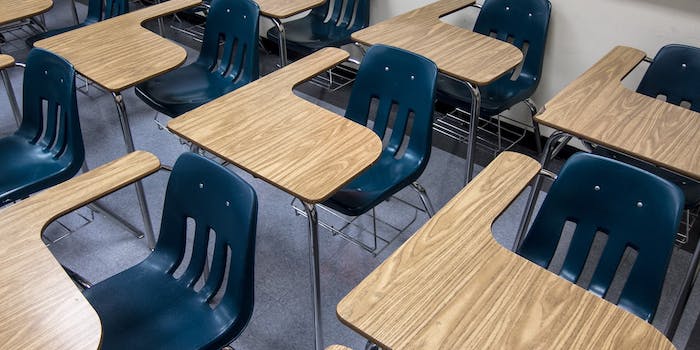 Just avoid the fundraiser's comments section if you want to retain your sanity.

Spring Valley High School became internationally famous on Monday when it joined a growing list of sites of police brutality, but there’s now a sliver of good news for the victim of the latest incident.

The Columbia, South Carolina, school was the site of a brutal attack by a high-school police officer on a student who was apparently resisting demands to leave the classroom. Instead of attempting a non-violent solution, the cop body-slammed the young woman.

The officer, Ben Davis, has been fired and is facing charges. Shaun King, an anti-police-brutality activist and lawyer representing the victim, has set up a GoFundMe fundraiser for her, and it has already surpassed its $25,000 fundraising goal.

“Jane Doe was the victim of police brutality,” King wrote on the fundraiser page, using the generic name for an unnamed party to a lawsuit. “While seated in her desk, doing her math work, former Deputy Ben Fields forcibly removed her from the desk by choking her, flipping the desk over while she was still seated, and slinging her six feet across the classroom by her clothes. As a result, she suffers injuries to her ribs, back, neck, shoulder; a broken arm, and abrasions to her face. The funds raised will be put towards medical costs, educational expenses, and any other expenses she has to endure.”

More than 1,000 people have donated to the campaign, the link for which has been shared more than 10,000 times.