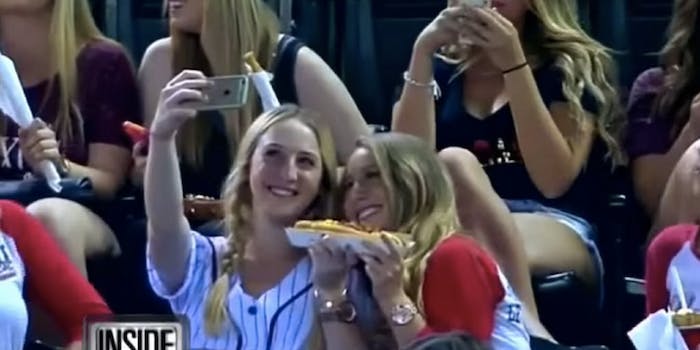 'We are happy to have the opportunity to shed some positive light on such a sensitive subject.'

Last week a group of Alpha Chi Omega sorority sisters attended an Arizona Diamondbacks game and, like any group of college students, documented the night out with some selfies. Their selfies, however, resulted in nationwide mockery: Just a short time caught on camera led to dismissive remarks like “Do you have to make faces when you take selfies?” and “Welcome to parenting in 2015!” from MLB sports announcers Steve Berthiaume and Bob Brenly.

Some college students might have just hidden in embarrassment (or fumed in anger). This sorority, however, is using the attention to raise awareness of Domestic Violence Awareness Month, which takes place in October.

Following the media brouhaha over the selfie-takers, the Diamondbacks and Fox Sports offered up tickets to the sisters for the following night’s game. But as Cosmopolitan.com reports, the young women turned around and asked for tickets to be donated to A New Leaf, a local nonprofit that supports survivors of domestic violence.

“If everyone who viewed this statement took the time to make a donation in recognition of domestic violence awareness, which is Alpha Chi Omega’s national philanthropy, we would be so grateful!” The sorority wrote in a Facebook post about the donation. “We are happy to have the opportunity to shed some positive light on such a sensitive subject.”

Prior to this request, the sorority responded to Berthiaume and Brenly’s wisecracks with humor of their own:

Check us out on the @Dbacks snapchat! We're having so much fun at our sisterhood tonight! #asuaxo pic.twitter.com/302zdlsv47

The sorority has also received widespread support from across the Internet. In addition to the Guardian decrying the “casual sexism” afoot in the mockery, many people on Twitter pointed out that the announcers’ comments did nothing more than tsk-tsk young women for having fun:

Take a second & ask yourself if you're ok with this level of vitriol being aimed at teenage girls for taking selfies pic.twitter.com/53qYxly4Pj

Alpha Chi Omega at Arizona State University has a well-established commitment to advocating for survivors of domestic violence. Days before the sisters attended the Diamondbacks game, they delivered a $10,000 check to Autumn House, a shelter affiliated with A New Leaf, after raising those funds in the charity’s honor. The sorority is also a finalist in Kendra Scott’s ‪#‎YouDoGood‬ competition, which may award them another $5,000 to donate to A New Leaf.

Follow #DVAM2015 throughout October for more information about domestic violence and ways to support survivors and their families.