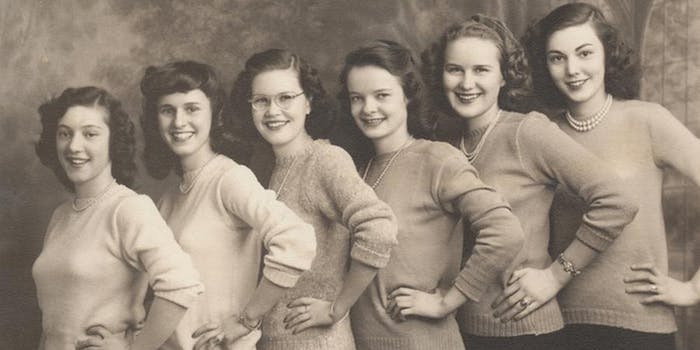 As if you needed any more evidence that sorority girls are bonkers.

Imagine a world where you’re fined for missing an arts-and-crafts workshop.

That’s the nightmare one redditor is living. Sororitywoes claims on Reddit’s Legal Advice forum that in addition to making racist jokes, telling Greek underlings to “shut the fuck up,” and charging her and her fellow sisters $100 for skipping out on a night of painting in order to go to class, her sorority is essentially extorting her to prevent her from deactivating.

The sorority member, who said she goes to a small school in Pennsylvania, posted the following horror story on Reddit:

I have been trying to deactivate from my sorority. When I joined, it claimed to be different from other sororities and for a few months we were. Now, it’s completely different. The exec board is made up of awful people and they make “casual” racist jokes about minorities on campus and in general, they curse people out, and they force us to choose between them or academics, constantly. For example, several of us had lab and we were told last minute that we had to attend an arts and crafts workshop. Professors don’t allow you to miss lab unless you’re on your deathbed so we told them that we couldn’t paint that night.

We were all fined $100. There are times when we have questions about something, like the dress attire for a certain event, and we’ll be told by the exec board to “shut the fuck up” because those details will come later.

When u/Sororitywoes tried to leave the sorority, she was told that she had to pay hundreds in dues before she could quit. She was also told that she’d have to place purchases orders for her sorority’s shirts and pins, though she wouldn’t be able to keep them. She was even told she has to give back a pen that she received when she first got into the sorority.

“I could maybe understand if they used our dues to pay for some of the things we did, but they don’t,” she added. “Every outing, we have to pay for. If we buy clothing with our letters, we have to pay for it… I’m sorry that this is so long, I just feel trapped and powerless right now.”

From the looks of it, this sorority’s leaders are treating sisterhood much more like a dictatorship. Kappa Alpha Oppression, much?

This isn’t the first time we’ve seen Greek life majorly out of whack. Fraternities have repeatedly made headlines for sending out awful emails to their members, and sororities have occasionally proved to be quite deranged.

Sororitywoes has also reached out for legal advice on the subreddit dedicated to giving out guidance on all things court-related. Apparently, she’s also contacted nationals to help her escape this hellhole of a sorority.

While many college students have happy memories of Greek life, that clearly won’t be the case for this poor girl. Here’s hoping this girl can emerge from this Delta Nu nightmare situation unscathed.