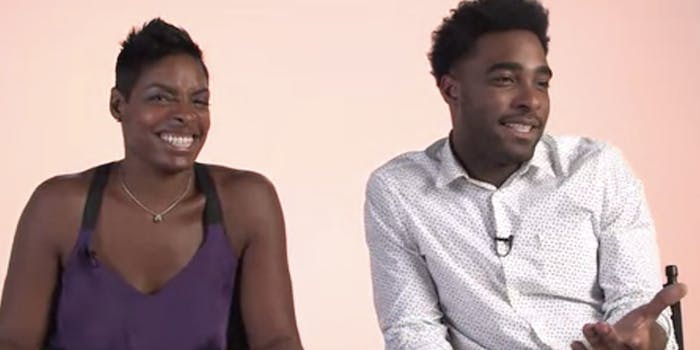 How sons react to watching their mothers being catcalled

Some people just need to see it to understand it.

Last month, TheScene.com asked fathers to watch video clips of their daughters being catcalled on the streets of New York City. The results, to put it mildly, were disappointing. All of the dads appeared clueless about the realities that their daughters experience when walking outside every day. A follow-up video, which debuted yesterday, features mothers and sons and has garnered more hopeful responses.

Much like the first video, “Sons React to Their Moms Getting Catcalled” features three mother/son pairs: Fran and Donovan, Angela and Max, and Elizabeth and Tyson. The sons watch clips of their mothers walking in Union Square and Harlem, being approached by men of various ages and backgrounds.

Uniformly, the sons are upset by what they see. Donovan, who appears to be the oldest, has accepted the reality of street harassment, but that doesn’t mean he likes it. “I mean, my mother’s beautiful. It happens. But I hate it, though,” he tells the crew.

Max and Tyson look younger (Max shares that he is about to enter high school), so the idea of catcalling as something that happens to adult women may be new to them. They appear shocked and deeply uncomfortable with what happened to their moms.

“That’s weird, he looked a lot older [than you],” Max says after the first clip. “Would it be more appropriate if we were the same age?” Angela asks. “No,” her son replies, seemingly trying to make sense of what he’s seen.

Tyson has an easier time articulating his feelings. “That’s ridiculous,” he says. “When someone catcalls my mom, I just feel angry and weird.”

The video also references a study from 2014 which found that incidents of catcalling often go unreported because women don’t want to make it a “big deal.” It is reassuring, then, that these sons’ reactions validate their mothers’ concerns about sexual harassment on the street.

By the end, the video suggests that these sons understand why catcalling is wrong. As Max aptly concludes, “If I was uncomfortable and someone kept saying that stuff to me, it would make me feel like an object, probably.”

Screengrab via The Scene