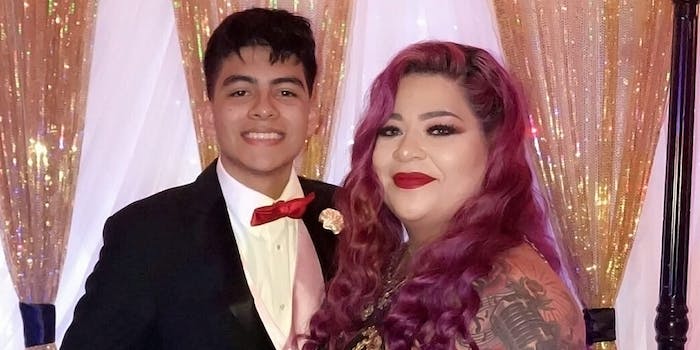 He called it the 'best night of my life.'

High school senior Joe Moreno went to his prom last Friday night, but instead of taking a classmate to the dance, he brought a special guest: his mother.

Moreno’s mom, Vanessa, gave birth to her son when she was just 17. Being a teen mother, she was forced to leave high school in order to raise him and never got the chance to go to her senior prom. Moreno, who lives in Corpus Christi, Texas, has always been aware of the hardships his mother dealt with, and so to honor her sheer love for him, he decided to take her to prom.

Moreno told KCRA that he decided to take his mom to prom as soon as he found out what prom was and asked the school’s administration for permission. Normally, students avoid bringing dates over 21 due to concerns about alcohol consumption, but the high school made an exception in Moreno’s case.

My mom had me at the age of 17 she dropped out of high school to focus on giving me her all. Last night I gave her the prom night she never had. pic.twitter.com/obsGzYxX8K

Had the time best night of my life

Suffice to say, Moreno and his mom have since gone viral as this year’s most adorable prom couple, with Twitter users praising him for being such a thoughtful son.

If this ain’t the cutest shit I’ve ever seen pic.twitter.com/qKPCmCgXma

This is the sweetest thing ever. Your mom did a beautiful job raising you to be a gentleman. ❤️

@joeamoreno8 I thought you and your mom were super sweet at the prom. Felt the need to sketch you guys!.<3 #art #prom #joeamoreno8 #sosweet :D pic.twitter.com/9VzagfByMO

Twitter users are trying to help Moreno get recognized nationally, too, with fans tagging everyone from Ellen DeGeneres to Good Morning America. Moreno is particularly hoping Drake notices him.

I honestly would cry if @Drake noticed me

EVERYONE HELP JOE GET NOTICED BY @Drake

Like Drake meant you he will say "God Plans" pic.twitter.com/kcCj9h5LH2

Moreno called prom “the best night of my life,” and Vanessa felt absolutely touched by her son’s gesture. The night was incredibly emotional for her, she said, particularly when the two danced, as she realized that her son was set to attend Texas A&M University in the fall to study oncology.

“If I could tell 17-year-old myself one thing it would be to never give up because God will always find a way, and to stay strong through everything,” Vanessa Moreno told KCRA.