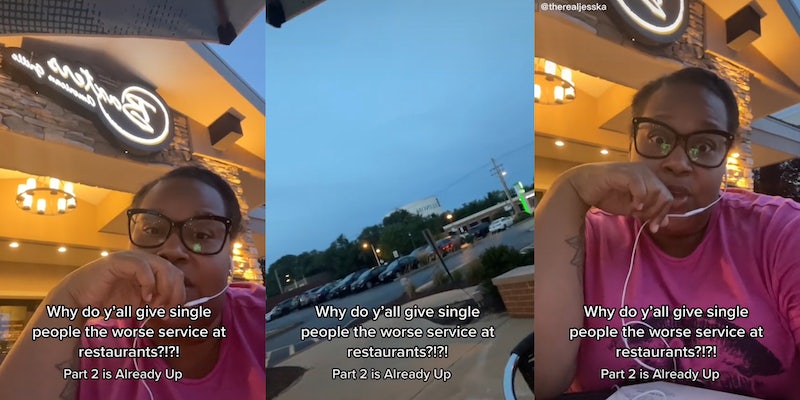 ‘I’m literally fighting back tears’: Woman says servers ignored her because she dined alone at restaurant

'I usually sit at the bar because I'm afraid of this happening.'

Dining alone is not for the faint of heart, especially if you’re single. It’s something TikToker @therealjesska knows all too well, as shown in a recent video where she calls out the inadequate service some solo diners experience.

“Can we talk about how being a person of one going out to eat, you literally receive the worst service of your entire fucking life?” JessKa Daniels (@therealjesska), 32, says, while sitting at what appears to be a patio restaurant. “Imagine being depressed and wanting to get out of the house and enjoy ambiance and you literally are being ignored by every waiter, waitress at this establishment.”

Daniels says there are open tables but that she was seated in an undesirable spot at the entrance of restaurant, which appears to be Baxters American Grille. Daniels says she was sitting down at the restaurant for about 20 minutes without being asked if she wanted anything to drink.

“Food here smells delicious, but I guess I’ll never know what it tastes like because I haven’t been served,” she says.

In part two of her video, Daniels talks about how the experience illustrated the downside of her “self-love journey” and taking part in solo dates.

One commenter said they usually sit at the bar since they’re afraid of being ignored if they sit at a table, while many others related to being avoided almost altogether when they dine alone. Others speculated that tips have something to do with servers prioritizing large tables, and one server weighed in to explain that such tables are usually more demanding.

For Daniels, being looked over during her latest solo date has her questioning how her self-love journey will continue if things stay the same. “I’m literally fighting back tears,” Daniels says. “After doing it for 10-plus years, I really want to cry.”

She encourages women to go on solo dates but says that those who have been going on them for a while, as she has, might also get fed up.

“And don’t get me wrong if you’re a woman who’s never done [solo dating], do it. It does feel good, and it’s very liberating. But if you’ve been doing this shit, it [isn’t] going to feel the same anymore. And I’m just in a part of my life where I’m trying to figure out what I actually love to do now. My hobbies have changed and so has my lifestyle.”

Daniels added in the caption that this was her “last solo date.”