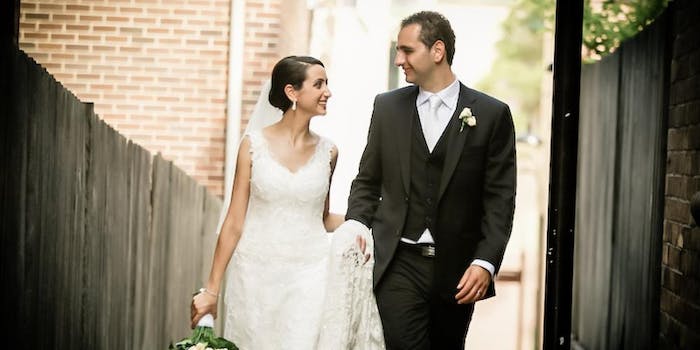 Most couples use ‘wedding hashtags,’ and other social wedding trends

You better have a trash can handy while you read this, 'cause you'll probably want to puke.

On the long list of Things That Are The Absolute Worst, couples who broadcast their weddings on social media rank somewhere between getting a full-body cavity search at the airport and overly earnest acoustic covers of Justin Bieber songs on YouTube.

But even though pretty much everyone agrees that soon-to-be-married couples should spend less time soliciting opinions for their china patterns on Facebook and more time drinking a nice tall glass of STFU, that hasn’t stopped them from turning to social media to broadcast the minute details of their nuptials.

Case in point: This survey from the Knot and Mashable, which says that more than 50 percent of couples have a “wedding hashtag” for their nuptials. #Nauseous #gonnapuke #puking.

According to the survey, despite the increasingly popular trend of “unplugged” weddings, approximately 55 percent of couples are using a hashtag for their wedding, while 20 percent are using a shared hashtag for their ceremony programs. (10 percent of couples, however, say they didn’t use a hashtag, but wish they did, which to me is kinda like saying you didn’t invest with Bernie Madoff in the early aughts, but you wish you had. No, guys. Just, no.)

The survey is also brimming with other delightful factoids about how couples are integrating social media into their wedding days, such as that 28 percent of couples share their engagement status on Facebook and Twitter within hours of becoming engaged, and 68 percent want to see photos of their wedding on social media “in real time.” Put another way, that means 68 percent of couples are actually logging onto Facebook, Twitter, and Instagram during their own wedding so they can see pictures of themselves at their own wedding.

You guys, I’m gonna make a proposal of my own right now. I propose that we all meet at a pre-established time and location and, slowly and methodically, attempt to climb up on our own butts. Because that’s basically what we, as a species, are all doing anyway. So save the date, OK? You’re cordially invited to witness the union between my head and my butt. They’ll be delighted to have you at their nuptials.