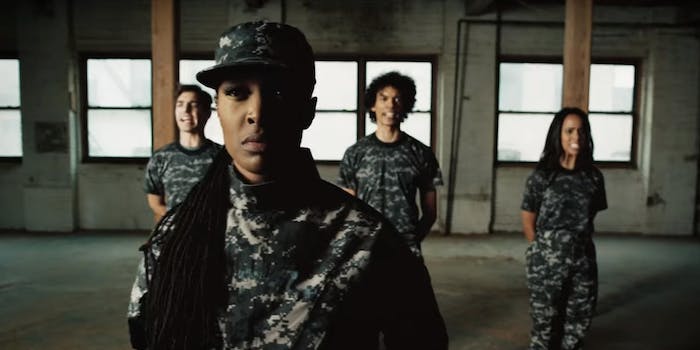 A peek inside the super-secret Social Justice Warrior training camp

Franchesca Ramsey is at it again in this latest video for MTV's 'Decoded.'

It’s official: 2015 was the “year of the social justice warrior.” At least, according to political columnist Matthew Rozsa, who celebrated lefty and liberal wins in a December Daily Dot editorial.

“2015 was the year when progressive movements on behalf of the marginalized seemed to reach a critical mass and, in the process, change how we discuss these sensitive issues,” Rozsa wrote. “If this doesn’t earn them the right to a title as cool as ‘social justice warrior,’ then I don’t know what would.”

While “social justice warrior” stems from a Gamergate insult, it’s evolved from an accusation aimed at the so-called overly PC into a reclaimed badge of pride. And no one has embraced it more than comedian and cultural critic Franchesca Ramsey, who imagined a more literal interpretation of the phrase in her latest video for her MTV series Decoded.

In order to prepare them (with barely a trigger warning), Ramsey sends her soldiers into a battle of fielding men’s rights activist targets, toxic YouTube comments, and the proper application of gender-neutral pronouns. Oh, and there’s barbed wire—why not?

In the past, Ramsey has used her MTV platform to take on the complicated history of Thanksgiving, the racist stereotypes behind fried chicken and watermelon, and more. But with her latest, she cements “social justice warrior” in its new status as a destination while also poking fun at the term itself.