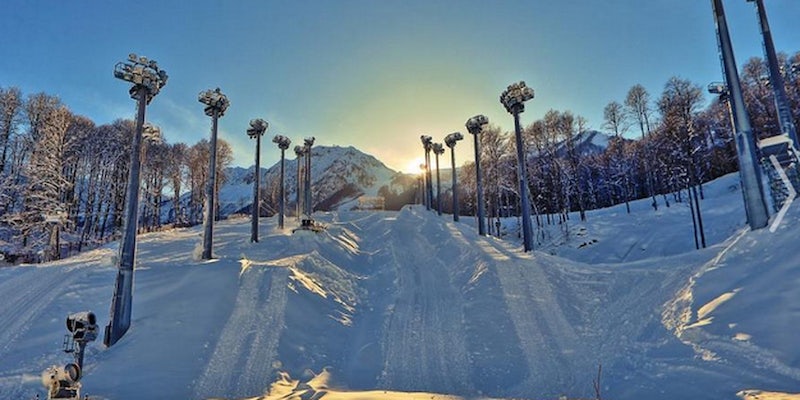 How Sochi made 1,000 football fields’ worth of fake snow

Lack of snow isn’t a problem you’d expect to have in Russia. But Sochi, where the 2014 Winter Olympics kicked off Friday, is the warmest region in the icy country, with a subtropical climate. As of last month parts of the Caucasus Mountain range outside of Sochi, where the outdoor Olympic events like skiing and snowboarding will take place, were bare. Like they say, you can’t control the weather. But you can hack it.

The Sochi organizers wanted to make damn sure there’d be enough powder on the slopes for this year’s Olympic Games. (No one wants a repeat of Vancouver in 2010.) They pulled out all the stops: stockpiled snow from previous winters, built a new-and-improved weather prediction computer model, purchased the latest snow gun technology from overseas, and even flew in a snowmaking expert from Finland. As the Games begin, the organizers are sitting on the equivalent of more than 1,000 football fields covered in a foot of snow.

Part one of Russia’s snow contingency plan started years ago: collecting as much snow as possible every winter to stock up for the 2014 Games. Officials compiled some 710,000 cubic yards of snow, which was stored high up in the mountains insulated under reflective blankets to keep it from melting in the summer. These massive snowpiles are an insurance policy. If there isn’t enough natural or manmade powder for the events, the piles will be released down the side of the mountain to replenish the slopes.

Safeguard No. 2 is the massive snowmaking operation leading up to the Games. Four hundred snow cannons installed on the mountainside guzzling down 230 million gallons of water, which was turned into about 1.7 million cubic yards of snow—about enough to cover 1,000 football fields under a foot of powder, according to the New York Times.

Michigan company SMI provided some of the snow machines at Sochi. Photo via SMI

The mechanics of it are quite simple. You need a lot of water and you need it to be really cold. And you need a nucleus to expedite the freezing process. To turn water into snow quickly enough without this added particle, the temperature would have to be about -40 F. Think about it: If you just spray water into the air on a cold day, it doesn’t have enough time to freeze and fall back to earth as ice or snow.

Photo of Rosa Khutor Alpine Resort outside Sochi via Sochi2014