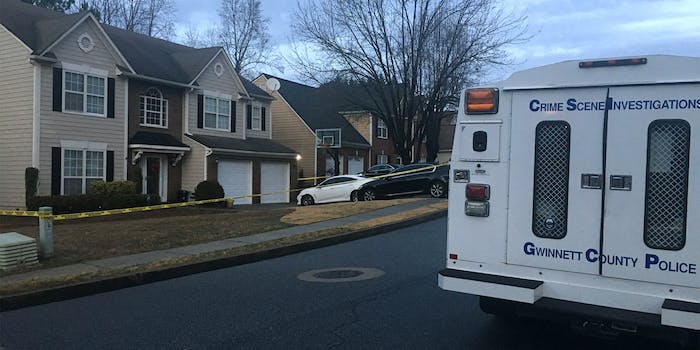 Police are investigating the deaths of two teens on New Year’s Eve, who reportedly were playing with guns on Snapchat shortly before the gun accidentally and fatally went off.

According to the Gwinnett County Police Department, a group of four male teens was gathered to hang out in a “makeshift shed” in Lawrenceville, Georgia. While sitting in the cramped shed one of the boys, identified as 15-year-old Devin Hodges, pulled out a handgun. The boys reportedly played with the gun, posing with it and taking pictures and videos on Snapchat with the gun pointed at the camera. Witnesses told the police that Hodges was playing with the gun and showing it off to the group crowded into the shed when it accidentally went off.

The bullet struck Hodges’ friend, Chad Carless, 17. Investigators said that Carless did not die immediately, but succumbed to his wounds before assistance arrived. Police believe Hodges placed the 911 call that brought first responders to the scene, but when they arrived they saw Hodges running around in the yard between two homes. Responders then heard the sound of a single gunshot. According to the police report, officers found Hodges with “what appears to be a self-inflicted gunshot wound a short distance from the makeshift shed.”

A 15-year-old classmate of the two boys, Bralen Bennett, said to the Daily Mail that he saw the video before going to bed and was angry when he learned the next day a gun had taken the lives of Hodges and Carless. His mother, Rhonda Bennett, also speaking to the Daily Mail, said, “’It’s is very sad. My son took classes with them and he received this video just moments before the tragedy.”

Police are investigating the incident as an accident, and are trying to find out how these teens got access to the guns.