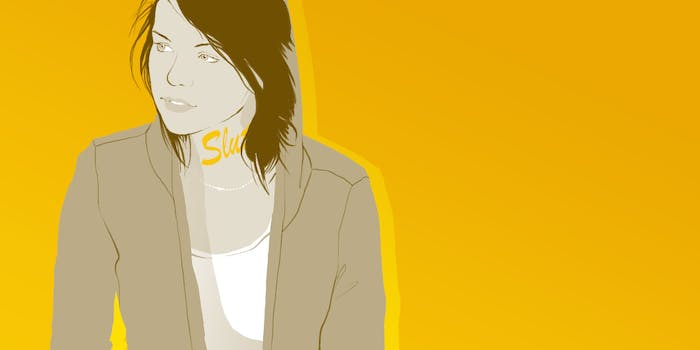 I was slut-shamed for being molested by my teacher

'Slut-shaming isn't about sex. It's about control.'

I was 11 when I grew breasts. I was 12 when my sixth-grade teacher first molested me. I was 14 when a security guard at the same school started pulling me out of class to take me to his office. I was 15 when I faced the teacher in court. And through it all, I was called a slut. Whore. Ho. Skank. Easy. Fast. Dirty. Loose. These are the words this world uses to shame women for…what exactly?

By the time I was 15, I’d been called a slut and its many synonyms by my classmates, my teachers, and even, on one occasion, a family member. It’s a thing almost every woman has been called at one point: it’s the universal punishment for girls, one of the ultimate scourges. There’s even a synonym to be used in a court of law: promiscuous, which ensures that the guilt will settle back on the shoulders of a rape victim who is telling her story. I’ve been called that one, too.

It was as if there was something shameful written on my body in invisible ink.

It’s a complicated thing to process when you’re first stepping outside childhood. One moment you’re a little girl, and the next moment the guy bagging your parents’ groceries is looking you up and down, darting his eyes to make sure your dad doesn’t notice. It really did seem that fast: almost overnight. At first, I thought this new, strange attention was merely because I had grown breasts. Their arrival, it seemed, marked the beginning of my peers’ cruelty and triggered the lechery of adult men. I developed early, and like many young girls who had womanly bodies at a young age, I faced harassment. Not just from my peers at school—gropes, snaps of my bra-straps, “accidentally” spilled water, rumors—but from adult men too; people like the grocery bagger, men leering from their cars while I waited for the bus, whispering foulness in my ear when my mama sent me into the gas station to pay while she pumped the gas. Men often interpret a child with a woman’s body as a viable sexual partner. It’s hard to say exactly why: patriarchy, rape culture, the infantilization of adult women as a result and, in turn, the sexualization of infants. And, of course, just straight-up pedophilia when it came to the teacher and security guard in my school.

So I tried to hide the source of what I thought must be the problem with baggy shirts and sports bras. I thought making my body disappear would make me disappear in the eyes of my abusers. It didn’t. What I was experiencing was more complicated than that. It wasn’t just my breasts: it was me. Being a girl, it seemed, was reason enough to be called a whore, as almost every girl I knew struggled with a boy calling her this for one reason or another. But girls with bodies like mine seemed to receive a special kind of brand, and once branded, the damage was done. I remember a boy named Derek was my boyfriend for a week before his friend mocked, “Can’t turn a ho into a housewife.” I didn’t even know what it meant, and neither, I’m sure, did he. They were words regurgitated from uncles, brothers, TV, even pulpits. But it had the word “ho” in it and that was enough to paint a scarlet letter on my chest. Derek dumped me days later.

It was as if a lever had been flipped. A neon sign hanging over my head had been switched on, glowing. The sign followed me everywhere. A boy at church said he had “heard I gave head.” I cursed him out (in church.) He laughed it off.

“Everybody knows. You ain’t gotta lie.”

What did everybody know? It was a question I struggled with often. It was as if there was something shameful written on my body in invisible ink, or as if I had done something terrible and then gotten amnesia. Everyone seemed to know something I didn’t know. But then there was the thing I knew that no one else did: that my teacher was a pedophile. There was no way anyone could have known what was happening to me – except, I learned later, one of his other victims; a classmate – but when I saw people whispering about me, my heart always lurched, thinking they knew. On one hand, I knew I had done nothing to deserve what my abuser was doing to me, but somehow that translated into blaming myself. If I had done nothing, then there must be something inherent to me that caused this.

Later, I learned that everything I was experiencing—rage, self-destructive tendencies, depression, violence—were symptoms of victims of sexual abuse.

As a result of this, my anger became uncontrollable. I got into fights. I had altercations with teachers. I hurt myself. All the while, the rumor-mill cranked out new stories: what I’d done and with whom. I wasn’t singled out in that way though: There were plenty of other girls with rumors following them down the halls. Looking back, I wonder how many of them were abused too, either at school or at home. At the time, of course, we had no sympathy for each other, despite our common ground. Patriarchy ensured that: we viciously contributed to rumors about one another, and every time we spit the word “slut” at another girl, it was a shield thrown up in vain.

I don’t remember how old I was when I decided to give them something to talk about, but I do recall my decision to start having sex as being a conscious one, born from feelings of powerlessness and nonexistent self-worth. I felt desperate to control some aspect of my life, so I adopted a philosophy along the lines of “Call me a ho? I’ll show you a ho.” It was around the same time that I started becoming aware that the boys my age were already having sex—often with multiple partners—and by eighth grade I had already noticed that they were never called anything but players. It never occurred to anyone to call them hoes. I was never under the illusion that I would earn myself a reputation as a player rather than a hoe – at that point I didn’t care. I think I thought that if I just “didn’t care” hard enough, loud enough, naked enough…it wouldn’t hurt so much.

Later, I learned that everything I was experiencing—rage; desperate attempts to control when and how I had sex, even if it meant putting myself at risk; self-destructive tendencies; depression; violence—were symptoms of victims of sexual abuse. But to the rest of the world, that context was non-existent. A ho is a ho. A ho has no feelings. A ho has no humanity. A ho has no story. Hos are erased. They are both invisible and hypervisible.

The word “ho” is a weapon wielded for different reasons. It can be used to knock a confident woman down a peg or two. It can be used to shame a woman for engaging in behavior that makes men uncomfortable. It can be used to control women who defy sexist expectations of sexuality. It can be used to relieve predators of blame. It can be used, as in an instance back in March involving Mo’Ne Davis, to dehumanize and remind a brown girl of her “place” in the world. It can be used to ease the conscience of a society fueled by violent misogyny. If she was “asking for it,” we never have to think twice about why a 47-year old man gets a slap on the wrist for raping a 14-year old girl.

As it turned out, I didn’t have to come forward on my own about my abuse. One of my abuser’s other victims told her therapist, who contacted the police. Their investigation led them to me. But by the time I’d worked up the courage to face my sixth-grade teacher in court, he didn’t even get the slap on the wrist. I thought being called a whore in the halls of my middle school was bad. But sitting on the stand in a court of law and having your eighth grade poetry project read out loud and analyzed for sexual content was worse. Later, when I found myself in the youth ward of a behavioral healthcare facility, those poems were referred to as a cry for help. In court, they were all the justification needed to convince a jury that I deserved what had happened to me.

My own (female) teachers testified against me, telling the jury that they’d repeatedly had to tell me to cover my shoulders, my thirteen-year old cleavage. They said I was promiscuous. They called my abuser a “long-time advocate for students,” arguing that he’d been “teaching for decades.” I was told to wear my mother’s pearls on the stand so I would look more innocent. “More innocent.” My teacher was cleared of all charges and retired with his pension. I think he’s in Florida.

It’s been said about women who have been slut-shamed that they are being held responsible for the actions of men. In the case of Monica Lewinsky, whose recent TED talk reignited the controversy and denigration that has dogged her for over a decade, that is true. The shame that haunts her has been eluded by Bill Clinton; his infidelity blamed on his wife’s frigidity or, sometimes, her ambition.

Slut-shaming, like rape, isn’t about sex. It’s about control.

Time and again, women are held responsible for the actions of men. Victims of sexual abuse, myself included, also know this all too well. But what about when there is no man? What about when it’s just…us? As we are? Me, 12 and a virgin, called a whore for the development of my body? Mo’Ne Davis for merely existing, black and female and pretty and public?

Slut-shaming, like rape, isn’t about sex. It’s about control. It’s about binding the wings of women before we’re even aware we have them, so that we never dare to fly. It’s about dragging us to the ground and through the mud before we ever know what the sky feels like.

It’s taken 15 years, but I’m finally picking off the mud, dried onto my flesh and stuck there like a rhino’s hide. With therapy, with self-love, with time and education, I have begun to replace my wings feather by feather.

Feathers. It makes me think of going to daycamp when I was young, when my chest was still flat. There was a girl, older than me, who wore belly shirts, who wore short shorts she cut in the camp van to be even shorter, her butt peeking out under the frayed denim. I thought she was a goddess. I followed her around. I sat next to her on trips.

I remember it like it was yesterday. A camp coordinator pulled me aside and looked at me frankly; the look of someone about to impart great wisdom. She said, “You don’t want to be friends with a girl like [Tanya.] You don’t want to dress like a slut, do you? You’re a good girl. Remember, birds of a feather flock together.”

Birds of a feather flock together.

Yes…but what if we’re all birds?

Editor’s note: This is the second installment in a series of essays exploring the consequences of slut-shaming. Share your story at [email protected].