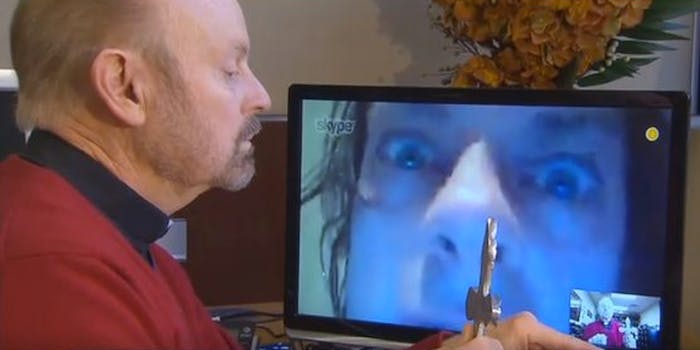 Church leaders allege online exorcisms are scams. But is any exorcism legitimate?

Thanks to the Internet, you can live pretty much your whole life without ever leaving your couch. Now, with little more than a laptop and webcam, you can even get your inner demons expelled.

Take Bob Larson. The Arizona-based evangelical Christian, who claims to have performed over 20,000 exorcisms throughout his 40-year career, is something of a Web entrepreneur, branching his demon-fighting business to video-chat services like Skype. Larson’s work was recently cast into the spotlight thanks to an Anderson Cooper 360 special, which followed the exorcist as he virtually expelled a spirit from a client from Norway.

Of course, Larson’s peers have trouble coming to grip with this 21st century exorcism. Religious leaders question the effectiveness of Skype exorcisms, claiming the exorcist can’t control a possessed person’s actions, which in turn makes the whole ceremony ineffective.

The Internet also provides a venue for self-teaching. Sites like exorcismtraining.net provide training kits for those looking to learn the exorcist’s secrets. That, critics from the Church allege, provides a new way for scammers performing to fake exorcisms and make a quick buck.

And Larson isn’t the only person purporting to expel demons via Skype. In 2009, the Jewish Chronicle reported a Skype exorcism, performed by Rabbi Dovid Batzri in Jerusalem, on a man in Brazil. The man, who only spoke Portuguese, began yelling that he could “smell many sins,” and that “the end is very near,” in Hebrew and Yiddish. The exorcism was reportedly captured on video, which doesn’t include an ending. That’s led some viewers to question whether the exorcism was actually successful.

But what makes an exorcism successful to begin with? Legitimate exorcists have their fair share of critics, too, who see the whole business as little more than its own scam. There’s plenty of evidence that the so-called “possessed” actually suffer from serious mental health issues, and that a visit from an exorcist is the functional equivalent to a placebo sugar pill. A visit from a mental health professional would help a lot more.

In a Skype exorcism captured by CNN, Larson sits in what appears to be his office, using hand gestures and saying key phrases intended to coax and eventually force the demons out of his client. The client, David, was supposedly possessed by four demons. As if striaght from a horror movie, David grumbles, “take you down, down, down, down.”

“You’re not taking me anywhere,” Larson responds. “You’re the one who’s going down.” At the end of the hour-long exorcism, Larson declares victory over the demon. “God bless,” he says. “Bye-bye.”