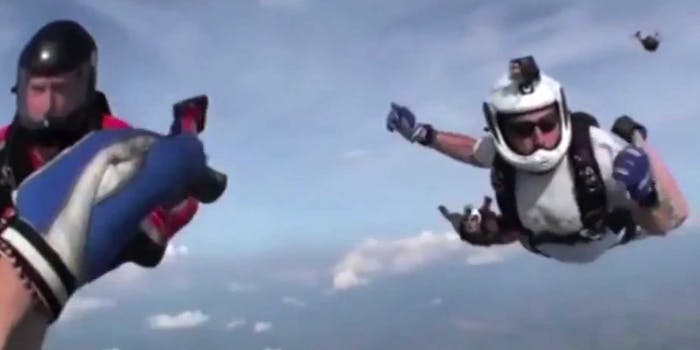 While we all enjoy a good story about some parachutist falling thousands of feet and living to tell the tale, you usually can’t rely on sheer luck to save you in a skydiving disaster. James Lee was fortunate enough to be jumping with some experienced, quick-thinking friends when he got into a spot of trouble. Otherwise, he may not have had such a happy landing.

Shortly after leaving the plane, at an altitude of 12,500 feet, Lee is struck by another diver and knocked unconscious. He immediatley starts to spin wildly as his body goes slack. His helmet camera then records the dramatic efforts of his companions, once they realize he’s unresponsive, to stabilize him and deploy his chute. He wakes up as he’s drifting to earth, with no memory of what had just happened, which has got to be a strange feeling.

Daredevil or not, we imagine he’ll be keeping both feet on the ground for a while.