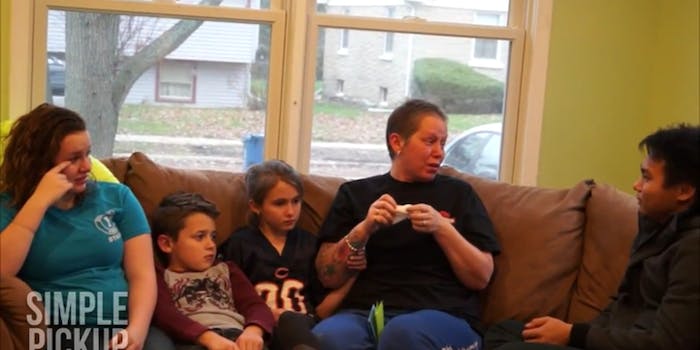 Like good pick-up artists, the guys of Simple Pickup didn't let rejection get them down.

Remember when the Simple Pickup guys offered to motorboat women in the name of breast cancer research, then blamed feminists when their donation was denied by the Breast Cancer Research Foundation?

Like good pick-up artists, the bros didn’t let rejection get them down.

In their latest video, they once again explain that they raised $7,000 from their previous video, but that a “small group” of feminists caused the video to be taken down. After getting that out of the way, they announce they’ve found a cause for their donation: Crystal Cody, a mom of three.

Simple Pickup surprised her with the donation and set up an IndieGogo campaign for further contributions. On camera, Cody tells the emotional story of learning she had breast cancer in 2009, her double mastectomy, and subsequent financial and health insurance issues. She’s currently not insured and is facing stage IV breast cancer. Donations will go to chemotherapy, medical expenses, and living expenses.

If you’d like to pay it forward and help Crystal out—using funds likely not obtained by motorboating women—you can donate here.