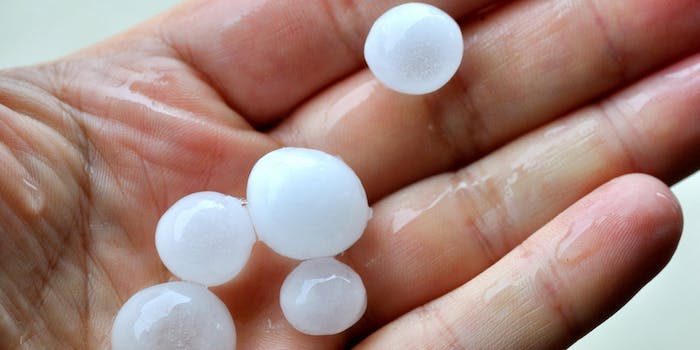 “It was like being hit by raining bullets from the sky.”

Living in boring old Britain, the land of mild winters and cloudy summers, it’s easy to forget that nature can still be a force to be reckoned with. The same certainly can’t be said for residents of the Russian province of Siberia. The region frequently drops to 20 below in winter—though even in summer, Mother Nature can still show humans who’s boss, as a recent video has shown.

On July 12, it was nearly 100 degrees in the city of Novosibirsk, and Siberians were enjoying the sunshine on the beaches of the Ob River. A YouTube video uploaded by the Siberian Times shows frollicking swimmers and sunbathers reclining on the shore—before the heavens opened.

Out of nowhere, hailstones “the size of golf balls and hen eggs” come pelting from the sky, transforming the idyllic scene into something reminiscent of a warzone, as bathers, caught hopelessly unaware, run for cover.

“It was like being hit by raining bullets from the sky,” one sunbather told the Siberian Times.

Within minutes, it was all over. For all the drama and lack of shelter, apparently no one at the beach was badly injured—though the ferocity of the storm does prompt a Russian woman to say at one point in the video, “If we die, I love you.”

However, local news reports say that elsewhere the storm caused the death of two 3-year-old twins, the Telegraph reports.

Photo via Will Merydith/Flickr (CC BY-SA 2.0)