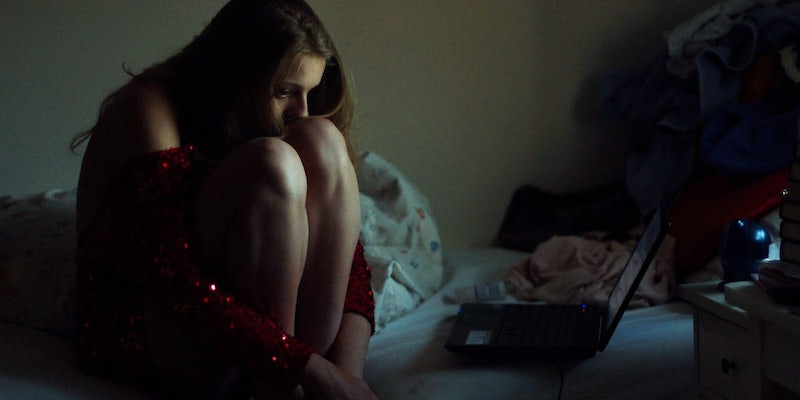 Won't somebody please think of the children!?!

A hot new teen trend sweeping the nation is sure to shock absolutely no one: “vamping.”

The New York Times‘ Laura Holson has penned 1,200 words excruciatingly detailing how America’s teens are—would you believe it—staying up late, talking to their friends and browsing social media. “Sometimes I look up and it’s 3 a.m. and I’m watching a video of a giraffe eating a steak,” mulls one teenage interviewee. “And I wonder, ‘How did I get here?'”

“You want to seem as cool as possible so you will post something at 2 in the morning, to just be like, ‘Oh, I’m part of this cool-kid group,'” another teen says.

One mother, Holson writes, said that “her daughter has difficulty untethering from her social group after dark; she has often caught the girl chatting in the wee hours with at least four friends on Kik, a mobile messaging system.”

Through multiple examples, the fundamentals of “vamping” are the same: teens are putting up two middle fingers to parental authorities and are talking long into the night with their friends—whether voluntarily or as a result of peer-pressure.

The term vamping, in this context, refers to the vampire-like nature of this nighttime Internet activity, apparently. It definitely does not refer to various unconventional sexual activities that go by the same name.

Holson even brought sociologists on board to explain the strange new phenomenon. “Hanging out is where young people begin to understand social dynamics,” researcher Danah Boyd says. “Because of the restrictions placed on them, very few interactions are unstructured until their parents go to bed.”

There’s certainly a kernel of truth here: your teenage years are formative, in which you work out who you are and what you want to be. But to suggest that “vamping” is a new phenonenon seems a stretch, to say the least. To put it bluntly: teenagers stay up late. Teenagers like talking to their friends, and can also feel pressured into maintaining elaborate social networks. Ten years ago we were doing it on MSN and MySpace, another ten years ago and teens were holding whispered conversations on their parents’ landlines at 1am. And let’s not forget the time-honored tradition of simply sneaking out at night.

Teenagers naturally push boundries, with or without the influence of new technology and the boogeyman of social media. The “vamping” buzzword just helps to disguise the fundamental message of the story: Young people are staying up past their bedtimes. Stop-the-freaking-press! That the behavior now has a (contrived) name doesn’t make it a trend or a thing—because it’s been a thing for decades, if not forever.

As an afterthrought, suggests Holson, “maybe teenage behavior hasn’t changed, whether it has a new name like vamping or not.” You know what, Laura—you might just be on to something there.