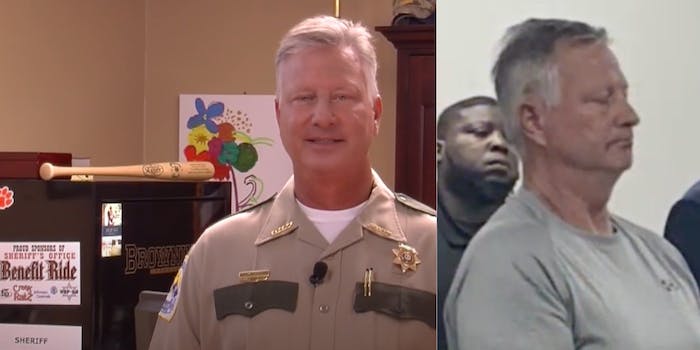 'He used the same bat to swing on authorities when they arrived at the house.'

In a detailed viral video, a YouTuber exposes a sheriff who’s done everything from embezzlement to beating a cat with a baseball bat.

Dion McNeil, an investigative journalist based in Columbia, South Carolina, runs a YouTube channel called Devil’s Advocate, where the video was posted this month. The footage aggregates and exposes the exploits of former Florence County Sheriff William Kenny Boone while indicting the state of South Carolina for its lax oversight and misconduct of its sheriffs all over the state government. The clip went viral Friday on Reddit’s “Bad Cop No Donut” forum.

The video shows a rundown of Boone’s run of “embezzlement and unprofessional conduct.” One of the first items was a set of voicemails where he threatened former Florence County finance director Kevin Yokim over the latter’s investigation into improper use of tax dollars stemming from a hotel stay. He threatened Yokim with physical harm and also said, “Payback’s gonna be hell.”

Yokim turned in the voicemails, which were already recorded into a statewide system, per McNeil’s reporting. However, it was determined that Boone’s threats of violence would not stand up in court, and the county’s leaders swept the situation under the rug.

However, one instance in February in McNeil’s video showed Boone to be much more than an alleged dirty law officer. A WMBF report details an unhinged Boone taken in “for allegedly hitting a cat and other items with a baseball bat while intoxicated.”

“Boone allegedly started throwing items in the home before returning to his car to obtain a baseball bat. The former sheriff then came back to the residence and started swinging the bat at furniture, the floor, a potted plant, and the cat, the report stated.”

The report says he used the same bat to swing on authorities when they arrived at the house.

He was arrested and booked on charges of domestic violence and ill-treatment of animals in general and torture.

According to a report from the Florence County Sheriff’s Office, authorities responded to Boone’s home for a domestic violence call from his wife. Anna Boone told police that the couple argued “about finances, including having money for probation,” amid ongoing troubles with the law.

A month before the incident, Boone pleaded guilty to embezzlement and misconduct and was sentenced to probation and ordered to pay back the $17,000 he misused. He was relieved of his duties by Gov. Henry McMaster (R).

More recently, Boone has been painted as a sympathetic figure and has been called a tragedy. While investigating alleged sexual misconduct by convicted pedophile Seth Hopkins in October 2018, six Florence County sheriff’s investigators would be shot by his father, Fred, upon arrival at their home. Two officers were killed in the ambush.

Out of his anguish for the lives lost, post-traumatic syndrome disorder was attributed as a partial cause of his downfall.

However, since his election as Florence County sheriff, there were rumors of intimidation and other allegations of misbehavior with the department. Investigators also found that Boone was using public dollars, specifically county and federal narcotics funds, to fund his family’s lifestyle.