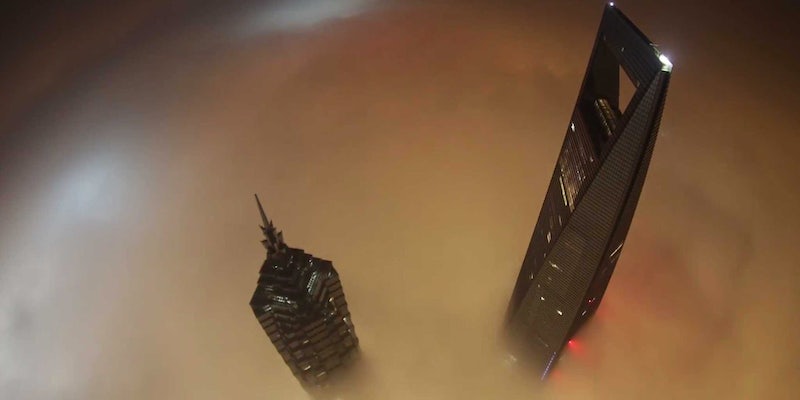 Excuse me, I have to go hug the ground.

Back home in Russia, they’re still focused on the Winter Olympics, but Vadim Makhorov and Vitaliy Raskalov just took the gold in skyscraper climbing: in an overnight ascent, the daredevils conquered Shanghai Tower, the world’s second-tallest building—without ropes or safety equipment. The video they recorded along the way is nothing short of heart-stopping.

Still under construction, the tower will be 2,073 feet tall, which may not sound like a lot till you’re sitting up there and dangling your feet over the side. The pair enters the structure under cover of darkness, soon gaining access to the exterior of some upper floors, and eventually a crane atop the roof. There’s cloud cover for much of the journey, but when it finally clears…well, let’s just say I have a lifetime of vertigo to look forward to.

“Aware of the strict Chinese law, we prepared carefully and picked an appropriate date, the Chinese New Year day,” Raskalov wrote in his LiveJournal. “At that time the security was less watchful, workers were on vacations, and cranes did not work. We got to the crane at around midnight. It took us almost two hours to get on the 120th floor by foot. And also, we spend almost 18 hours on top of the building, sleeping and waiting for better weather.”

For whatever reason, free-climbing urban structures—sometimes called “city climbing”—seems to be a popular (and lethal) teen hobby in Russia, if not a national pastime. Much of it seems to be done for the online bragging rights. We get it, guys, and we’re very impressed. Now please get down from there, you’re making us nervous.