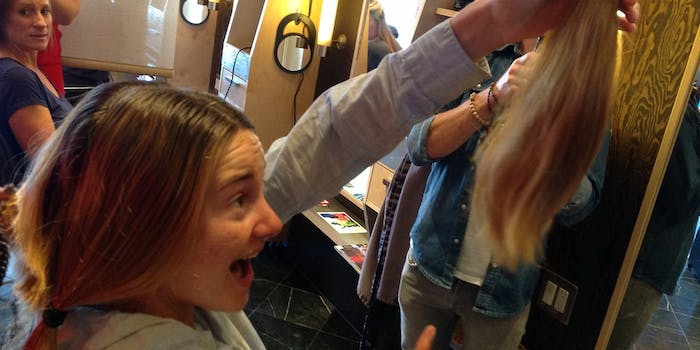 The Fault in Our Stars actress Woodley donated the hair she cut off for the movie.

Filming for the movie adaptation of John Green‘s heartbreaking novel The Fault in Our Stars (TFiOS) has only just begun, but the film’s faultless star is already embracing the Vlogbrothers catchphrase of “don’t forget to be awesome” by inspiring girls to chop off their hair for charity.

Shailene Woodley cut her hair to help her prepare for the role of Hazel Grace Lancaster, a 16-year-old living with terminal cancer who is described as having a “pageboy haircut” in the novel. She donated her hair to Children With Hair Loss, a charity that provides free wigs to children who have experienced hair loss from cancer, burns, and other ailments. Along with Green, she also launched a social media campaign to encourage Vlogbrothers fans (known as Nerdfighters) and TFiOS fans who have eight inches of hair or more to spare to join in and donate.

“When Shailene told me about this, I immediately thought there might be people in nerdfighteria who want to join her,” Green wrote on Aug. 13. He called it “entirely Shai’s idea,” and after posting the news on Tumblr, he mentioned Woodley’s intentions in a Vlogbrothers video.

Rallying behind the hashtags #hairforhazel (after the novel’s protagonist) and #itgrowsback, Woodley shared her thought process behind the decision. On a Tumblr created just for the occasion, she called the opportunity to donate her hair a “blessed gift” and “an honor” while explaining the difficulty in cutting her hair.

“i think there is something so exceptionally admirable about one’s commitment to allowing their face to shine without hair blocking it,” she wrote. “it’s all about balance i suppose. about knowing what’s right for you on your own personal journey.”

Just hours after Green’s video went up, girls were already posting photos of their new hairstyles and chopped locks on social media. For some it was a spontaneous decision prompted by Woodley and Green. Others had planned to donate their hair for years, but it was that push from Woodley that convinced many of them to make that final plunge.

“I’ve always wanted to be brave and cut it short, but never had the courage or confidence—until now!” thelillyofshalott, who convinced her mom to donate along with her, wrote. “Shailene Woodley’s post about her haircut served as direct impetus for me to be daring, as well. And for a good cause!”

Some of the donors even included cancer survivors who were more than willing to give their extra hair to make a wig for a child. And about two weeks after Woodley shared her haircut, people are still donating their hair for Hazel.

Today, a Nerdfighter is born. My 10 year old sister did not forget to be awesome. @realjohngreen #hairforhazel pic.twitter.com/bbztPggiib

After all, it’s just hair. #Itgrowsback!