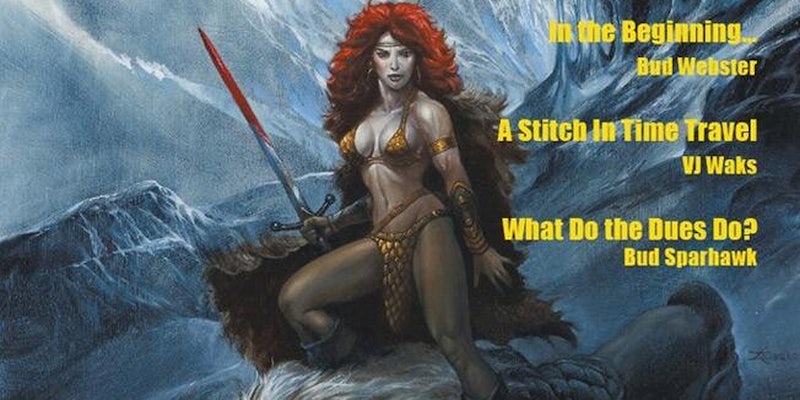 The editor of the Science Fiction Writers' Association bulletin has resigned over an Internet backlash against sexism in the magazine.

The editor of the bulletin for the Science Fiction Writers of America has resigned this week in the middle of an Internet backlash against the most recent issue of the magazine. But Jean Rabe‘s departure from the respected print magazine is just the latest casualty in an ongoing, painful, and deeply entrenched debate about gender, race, othering, and female participation within sci-fi publishing.

It’s a debate that touches on everything from the depressing decline of women writing and participating in science-fiction publishing, to Racefail, a year-long 2009 debate about representation that still lingers large over the community. It also encompasses the ongoing critical backlash against objectifying women in geek culture.

But perhaps most importantly, the controversy sits right in the middle of the conflict between traditional publishing and the Internet: specifically, the power the Internet has to challenge the embedded sexism and racism within the industry.

The SFWA bulletin can’t catch a break lately after its last three issues contained eyebrow-raisingly sexist attitudes towards women in publishing. It all started with Issue #200 and the bulletin’s long-running column, “Resnick & Malzberg Dialogues,” a back-and-forth between writer Mike Resnick and editor Barry Malzberg. Issue #200 included an article called “Literary Ladies (Part 2).” The column was a follow-up to a previous look at women authors in sci-fi, which in itself had caused some skepticism due to the specification of women as a class unto themselves. In Part 2, the men discussed female editors in publishing. But they spent more time waxing nostalgic about the attractiveness of the women they worked with than about their professional competence:

She was competent, unpretentious, and beauty pageant gorgeous … as photographs make quite clear…[S]he was a knockout as a young woman. …

According to Margaret, during its first few years of existence CFG was populated exclusively by men. Then Bea joined. Then the members’ wives got a look at Bea in her swimsuit at the 1950 Midwestcon. Then the club’s makeup changed to the 50% men and 50% women that has existed ever since.

The dialogues rubbed lots of people the wrong way. “I hoped they might include the women who inspired me and introduce me to many I hadn’t yet discovered,” wrote E. Catherine Tobler in a post announcing she was ending her SFWA membership. “That’s not what I found. I found a dialogue that seemed more focused on how these “lady editors” and “lady writers” looked in bathing suits.”

But that’s not the only thing the 200th issue did to drive home the looming gender divide in sci-fi. Without a hint of self-awareness, the SFWA bulletin featured artwork of a scantily clad “warrior woman” dressed in a bikini–in the middle of a frozen landscape.

The cover art came months after Jim Hines, a respected science fiction author, took a page from the Hawkeye Initiative and its parent meme, and applied the meme’s critique of ridiculously objectified female poses to sci-fi and fantasy covers. Hines’ posts were so popular and spurred so much debate that they won him a Hugo award.

As Geeking Out put it:

Rabe—who certainly would have been aware of Hines’ win in 2012 and what he wrote about which made him worthy of the nomination—should have thought twice about making the cover of the 200th issue an image of a woman in improbable armor.

And there were more problems on the way. In Issue #201, author CJ Henderson tried to use Barbie as an example of career longevity:

The reason for Barbie’s unbelievable staying power, when every contemporary and wanna-be has fallen by the way-side is, she’s a nice girl. Let the Bratz girls dress like tramps and whores…. Barbie got her college degree, but she never acted as if it was something owed to her, or that Ken ever tried to deny her.

She has always been a role model for young girls, and has remained popular with millions of them throughout their entire lives, because she maintained her quiet dignity the way a woman should.

Issue #202, the most recent issue, seemed to push an increasingly skeptical community over the edge into outrage. After the initial backlash to the 200th issue, which appeared in January, Rabe invited Hines to write a guest column about the need to end objectification of women. However, she also chose to include an article from Resnick and Malzberg in which they complain heatedly about “censorship”—that is, backlash over their previous article about “lady editors” and the magazine issue’s cover.

In their rebuttal to the backlash, Resnick and Malzberg attempt to define the issue as being about censorship. Initially, the men explain their long history of, essentially, spending decades getting away with writing and saying sexist things. Although speculative fiction is a notoriously male dominated industry, Resnick and Malzberg fail to acknowledge that women and other marginalized members of the SFWA might not have been able to challenge their behavior. Instead, they complain that “younger” readers are now calling them out. Resnick categorizes the offended readers as “members that want to censor the word ‘beautiful’ and the thousandth painting of an absolutely generic warrior woman.”

Malzberg takes it a step further, calling the offended reactions in themselves “offensive” and calling his critics “liberal fascists” who are threatening free speech.

This seems to be the subterranean issue here… the conviction held by at least some of the protestors that what they found offensive should be banned. That does not take us to any place that a writer’s organization should want to go.

If the backlash had been harsh before, it quickly reached a fever pitch, spreading to many corners of the publishing blogosphere and touching on numerous debates about representation and sexism within the sci-fi community.

“I could make a drinking game about this article,” wrote respected sci-fi/fantasy blogger Foz Meadows:

[T]ake a shot every time the author deliberately highlights the femaleness of the women he mentions, the better to explain how these ladies never said I was sexist, so clearly their silence at a time when dissent could’ve seriously impacted their careers constitutes an impartial, absolute assessment of the non-offensiveness of my work, as well as speaking declaratively for all women, forever…. Newsflash, Mr Resnick: the fact that something has a long and prominent history doesn’t make it OK.

Again and again, the response from women and other writers responding to Resnick and Malzberg’s rant is to highlight the way balances of power have shifted, and how the Internet has given them more power to speak out.

“I get it,” wrote author Kameron Hurley in response. “The world used to agree with you:”

You used to be able to say things like, “I really like those lady writers in this industry, especially in swimsuits!” and your fellow writers, editors, agents, and other assorted colleagues would all wink and grin and agree with you, and Asimov would go around pinching women’s asses, and it was so cool! So cool that he could just sexually assault women all the time! You used to be able to say, “Black people are fine. As long as they are clean and don’t live in my neighborhood,” and your friends and colleagues would wink and grin and agree with you. You’d say, “Gay men are gay because they were abused, and all lesbians are really bisexual and just need the love of a good man,” and hey, it was Ok, because no one disagreed with you….Well, welcome to 2013. And the world wide web, where everybody, even those underprivileged nobodies you never had to listen to before, has a chance to be heard.

And oh, how they’re being heard now. In the fortnight since the furor arose, hundreds of writers, bloggers, and readers have spoken out about both the specific SFWA article and their own experiences with institutional sexism within the science fiction community.

“I have trouble buying the idea that the real problem isn’t the sexism, but people pointing out and criticizing the sexism,” echoed Hines.

“[Resnick and Malzberg] throw around the words ‘thought-control’ and ‘censorship’ merely because they’ve been made to feel uncomfortable for their beliefs,” echoed writer Jason Sandford. “News flash: Feeling heat for your ideas is not censorship. Having to defend your beliefs when challenged is not thought-control.”

In his official apology and response to the incident, SFWA president John Scalzi announced that he had formed a task force to “solicit comment from professionals in publishing both inside and outside SFWA as well as from our members, with the goal of offering to the president direct, actionable steps to make the Bulletin a valuable and useful magazine for our members – one that fulfills SFWA’s mission to inform, promote, defend, support and advocate for all of our members.”

In the wake of the apology, discussion has switched to moving forward. Geeking Out, in its point by point outline, laid the ultimate blame squarely at the feet of the editor, Rabe, for allowing each of the bulletin’s subsequent missteps to occur unchecked. Author S.L. Huang was even more adamant:

The people you really should be angry with are Resnick, Malzberg, and whatever editor(s) let their article through.  They’re the people who let down SFWA.  They’re the people who made your public face into sexist douchebaggery…They’re the ones who made it so that when people google “SFWA,” they’ll get this sort of news instead of heartwarming stories of how you support writers.  You’re victims in all of this, too.

Rabe has not made a public statement about the events or her resignation.