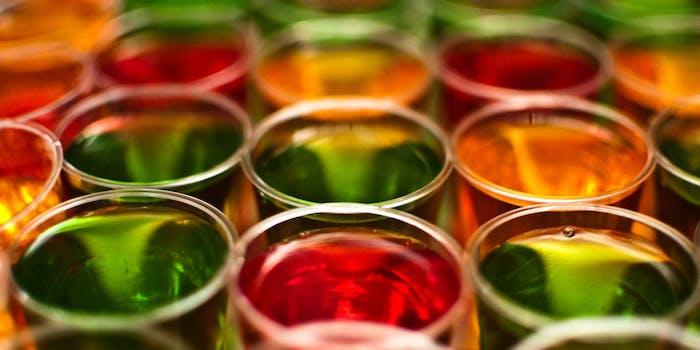 Twenty percent of Australians blame rape victims if they were intoxicated at the time of assault.

Today in news that will depress you to no end: A new national survey has determined that a shocking one in five Australians believes a woman is at least partially responsible for her own sexual assault if she’s drunk, the Sydney Morning Herald reports.

Led by the Australian community health organization Vichealth, the survey, which polled nearly 17,500 people, also found that one in six people “agree with the notion that when women say ‘no,’ they actually mean ‘yes,’” and that 22 percent believed that domestic violence is justifiable if the offending partner is “so angry they lose control.”

Unsurprisingly, the results of the Vichealth survey sparked outrage among Australian sexual assault and domestic violence victim advocates, with politician Larissa Waters rightly summing up the results of the study as “shocking and revolting.”

“It’s simple—nobody deserves in any way to be raped or attacked,” Waters told SBS.com. “The blame lies with the attackers and the rapists.”

But while you might like to think this cavalier attitude toward rape and domestic violence is somehow specific to Australia, you’d be wrong. Apparently, a shocking number of people worldwide seem to be confused about whether or not having sex with an intoxicated person constitutes rape, if this incredibly depressing Yahoo! Answers thread for “Was it rape if I was blackout drunk?” is any indication:

Thankfully, the vast majority of the responses on the thread correctly tell the original poster that it is rape, as she was not in the right frame of mind to provide consent. But the responses to a similarly heartbreaking thread from a 14-year-old New Zealand poster, “I think it was rape but I’m not sure?,” are far less helpful: 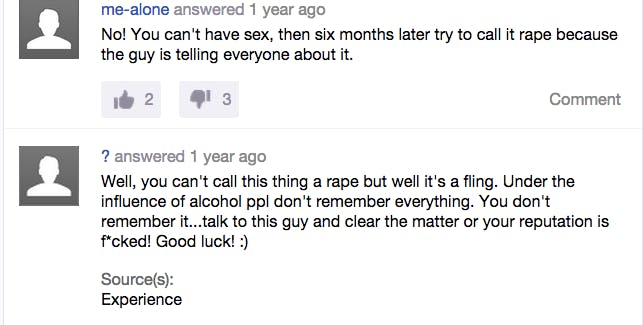 (Love how this guy lists the source for his incredibly inane, misogynistic advice as “experience.” Did you go to an accredited medical training institution to get your advanced degree in “experience,” good sir, or did you just get a bachelor’s?)

These responses to a 15-year-old girl who says she was sexually assaulted after drinking too much at a Katy Perry concert (she also says she threw up and passed out during the rape itself), are just as stomach-turning:

When deciding to pursue legal action against the man who had sex with you while you were unconscious and vomiting, it’s not always important to consider his delicate feelings. You might think you’ll make it harder for him to, say, get a job if a prospective employer Googles him—but even that might not actually affect his chances that much. 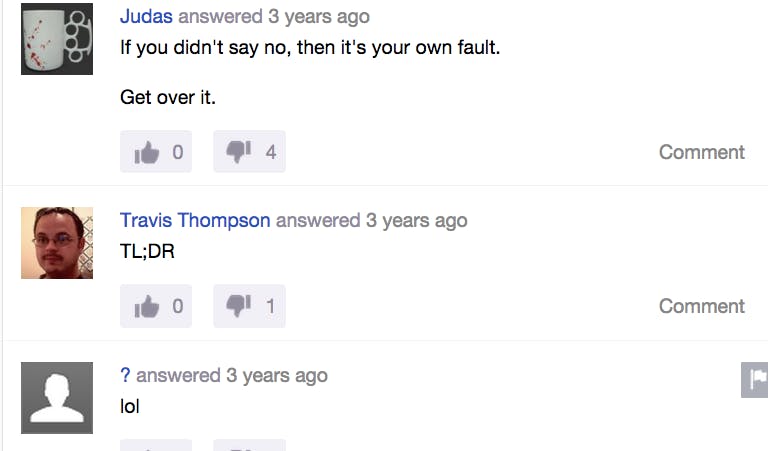 Jesus Christ. I want off this rock.

If you really want to ruin your day, there’s no shortage of examples of threads just like these, where rape victims turn to the Internet to try to process what has happened to them, only to be victim-blamed, slut-shamed, and shouted down.

There’s this thread by a girl whose friend blacked out and had sex with a guy she met at a bar, only to be told that her friend’s story is “fishy” and “sounds like she’s lying to me.” There’s this thread from a girl whose rapist assaulted her after pressuring her to down a series of shots, only to be told that she “put [herself] in a position to be taken advantage of” and has to “take responsibility for [her] own actions.”

It’s easy to get incensed over the incredibly flippant and ignorant tone of these posts, and how quick (ostensibly male) commenters are to dismiss the feelings of sexual assault victims by blaming them for something they have no control over. But a more appropriate response to these threads and to the Australian survey would probably just be profound sadness.

Despite how far we’ve come in terms of understanding sexual assault laws and consent and no means no, in trying to teach men not to rape and women how to navigate a world that blames them for the horrible things that happen to them on a daily basis, the stark truth is that there’s still a large number of people who just can’t get any of this through their heads. Short of more sexual assault education, it’s hard to come up with a solution for that kind of ignorance.

Just to be clear, although it seems so obvious that it hardly bears repeating: Having sex with a woman who is too intoxicated to provide consent is always rape. The law defines it this way. College campuses define it this way. And if you consider yourself a reasonable, decent person, you should define it that way too.