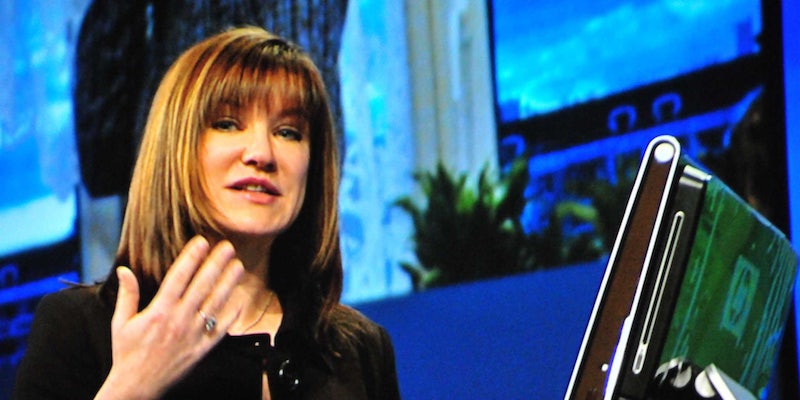 20-year Microsoft veteran Julie Larson-Green has been promoted to lead the division of Microsoft that oversees the Xbox. Some gamers can't look past her gender.

Julie Larson-Green is a 20-year veteran engineer at Microsoft, has been a critical voice in overhauling the Windows user interface, and—according to some male gamers—is obsessed with baking and knitting.

And those were some of the tamer things being said this week by misogynistic gamers after Microsoft announced that—gasp!—a woman would be assuming leadership over the division responsible for the Xbox.

And fanboy passions for the Xbox are fueling an ugly online backlash against Larson-Green because of her gender.

“Great … now there will be apps dedicated to baking and knitting,” wrote one irate gamer on the gaming news site N4G.

In other comments, recurring sexist gamer myths begin to shine through. Some argued that Larson-Green was not a “real gamer.” One does not need to travel far on the Internet to find similar prejudice hurled at female gamers in general.

“Personally, I can’t stand most (female gamers),” wrote Reddit user monstrodinessa last year. “I feel like 90% of female gamers either suck horribly, or are constantly looking for attention because of it.”

And like everyday female gamers, Larson-Green is not only having her credentials dismissed online, she’s also eliciting harassing and sexually degrading comments.

On the comments section of a Gamespot article about Larson-Green’s ascension, commenters were quick to label her a “M.I.L.F.” and say things like “love to get her in front of the Kinect spycam.”

These are the kind of comments female gamers have been running up against for years, and it’s why many claim they choose to keep their gender a secret online. The Xbox Live community’s reputation for sexism is well established. It’s been denounced by industry leaders and mocked by nerdy satirists.

For a veteran executive like Larson-Green, who has already overcome tougher obstacles during her rise at Microsoft, the comments of Internet trolls aren’t likely to impact her self esteem. But the knee-jerk reaction to her promotion is another troubling sign of sexism in traditional male-dominated online communities.

Though the comments from male counterparts aren’t nearly as antisocial, female Wikipedians have complained of an anti-female culture on that site. Perhaps that’s why the online encyclopedia is struggling to close a massive gender gap.

And earlier this year, 4chan advocated the firing of developer liaison Adria Richards after she tweeted her condemnation of two male attendees at a tech conference who made an off-color joke.