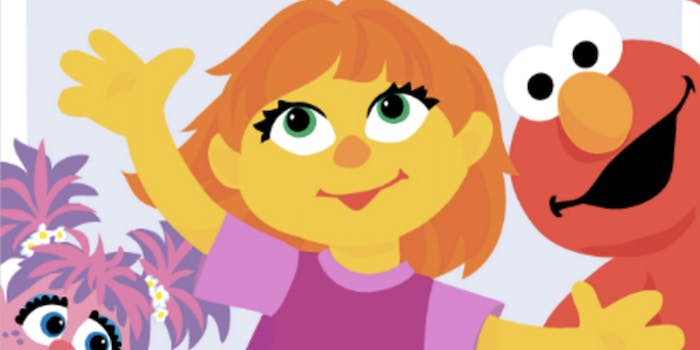 Kids and their parents can learn more about autism spectrum disorder.

There’s a new cuddly critter in the Sesame Workshop: Julia has yellow skin, orange hair, and a smile as big as Elmo’s or Abby’s. What makes Julia special, though, is she is the Workshop’s first autistic character. 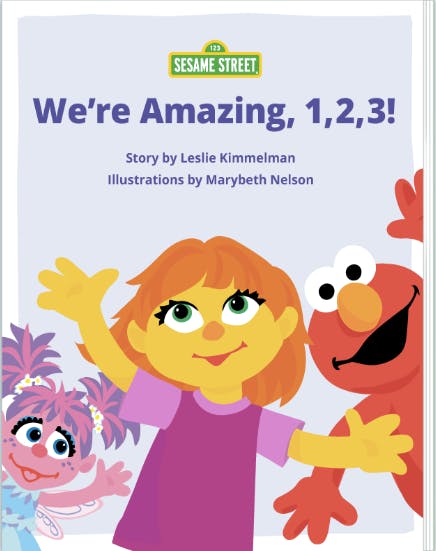 Julia is the face of Sesame Street and Autism: See Amazing In All Children, a new initiative that launched on October 21 after three years in the making. The initiative is meant to bring awareness to autism spectrum disorder (ASD) and educate children with and without autism, as well as their families and communities. And for good reason: According to Sesame, 1 in 68 U.S. children is diagnosed with ASD.

Even though ASD is more prevalent than childhood cancer, juvenile diabetes, and pediatric AIDS combined, it’s a highly misunderstood disorder. One of the biggest misunderstandings about ASD is that it’s not a behavioral or emotional disorder. “Autism is a neurological disorder that impacts the way our students think and behave,” Susan Catlett, Ph.D., BCBA-D, the CEO of Autism in Action, told The Daily Dot. She continued, “The reality is that they do not come to the learning environment ‘pre-wired’ for appropriate social skills and interactions to occur naturally. They need to be taught to interact, play, and socialize in a very systematic way.”

Frank Campagna is a Sesame Street producer and the father of an autistic son. He blogs about his experiences as a father of a non-verbal autistic child on his blog, Autism Daddy and was able to contribute his own first-hand knowledge to the Workshop’s new initiative. He praised Sesame Workshop for developing this new program with input from both special needs teachers and autism parents who do have a deep understanding of ASD.

One Sesame Workshop video speaks specifically to moms and dads on how to be a supportive parent:

“Having first hand, real world experience with autism helped in every aspect of this project, many times in small ways that others might not notice,” Campagna told The Daily Dot. “A perfect example is when we were shooting one of the autism films in a young boy’s home. I noticed right away that the knobs on the stove had been removed, which is a very common scene in an autism household. I mentioned it to one of our film producers and he was able to frame a shot with the boy so that the stove was in the shot. Many folks won’t notice it, but that’s a little hidden gem for all the autism parents out there!”

In addition to videos like the one Campagna mentioned, resources from Sesame Street and Autism: See Amazing In All Children include digital story cards and storybooks, aimed at both children (primarily those between the ages of 2 and 5) and adults. The digital story cards, for example, help children with ASD go through the different steps of their daily routine.

And of course, there are plenty of muppets. One video features Elmo and Abby Cadabby singing “The Amazing Song,” which tells kids “we all are amazing each in our own way” with autism-specific lyrics like “for some of us it’s harder to reach out as others do / but when you just look closer you’ll see amazing-ness show through”:

Another video introduces kids and their parents to Nasaiah, a little boy with autism:

“Lots of kids have autism,” says the muppet Abby Cadabby in the video about Nasaiah. “And that means their brains work a little differently. My friend Nasaiah, he’s learning to work on things that are just a little bit harder for him.” Abby explains how Nasaiah loves to color with crayons and read stories just like other kids, but he also is learning how to look people in the eye when he speaks.

“For kids with autism, I think they are going to be thrilled to see true accurate representations of themselves in these resources,” Campagna said. “For kids without autism, the films and storybook highlight the fact that they might have classmates who do things a little differently, but they have a lot more things in common.”

That education is more important now than ever. “With the prevalence of 1 [in] 68 [students having autism] in the U.S., we are facing an epidemic,” said Dr. Catlett, the Autism in Action CEO. “The projected rates in 2020 could be 1 [in] 22 [students], if they continue to increase at the rate they have.” And when people don’t understand how to interact or help autistic children, it can lead to discrimination, violence, and verbal abuse, according to the Sesame website. Even worse: “Children with autism are five times more likely to be bullied than their peers,” the website states.

Catlett is hugely supportive of initiatives like Sesame Street and Autism: See Amazing In All Children. “Children with spectrum disorders are in every public school and we need for the general public to understand how they think and learn differently than people who are neuro-typical,” she told The Daily Dot.

Campagna, who is very close to the project both personally and professionally, is beyond proud of what Sesame has created. “Having a 12-year-old with autism, I can honestly say that working on this project has been the highlight of my 20+ career at Sesame,” he said.

He believes this initiative is a step in the right direction for autism awareness. “There’s a famous saying in the autism community that, ‘If you’ve met one kid with autism then you’ve met one kid with autism,'” he said. “The autism spectrum is so wide that no two autistic kids are the same…And because of this, we at Sesame Workshop knew that we could never truly represent every kind of autism. However, if you look at the content that Sesame Workshop has produced, I think we have shown a great snapshot of the many different faces of autism.”

Update March 20, 8:28am CT: Julia will make her debut as a muppet on an upcoming episode of Sesame Street.