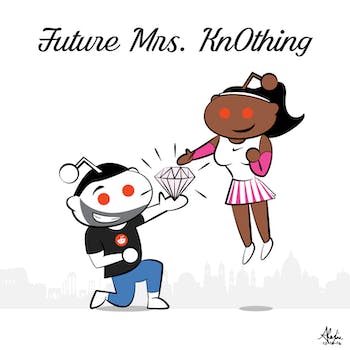 Tennis great Serena Williams just announced she’s going to be “Mrs. Kn0thing” on Reddit, where she and Reddit co-founder Alexis Ohanian made their engagement official.

From her official account, Williams wrote a poem detailing the engagement.

I came home
A little late
Someone had a bag packed for me
And a carriage awaited
Destination: Rome
To escort me to my very own “charming”
Back to where our stars first collided
And now it was full circle
At the same table we first met by chance
This time he made it not by chance
But by choice
Down on one knee
He said 4 words
And
r/isaidyes

Ohanian responded to the poem, “And you made me the happiest man on the planet.” Williams also created the subreddit r/isaidyes for other people to share stories of their engagements.

It’s the start of something, one way or another.