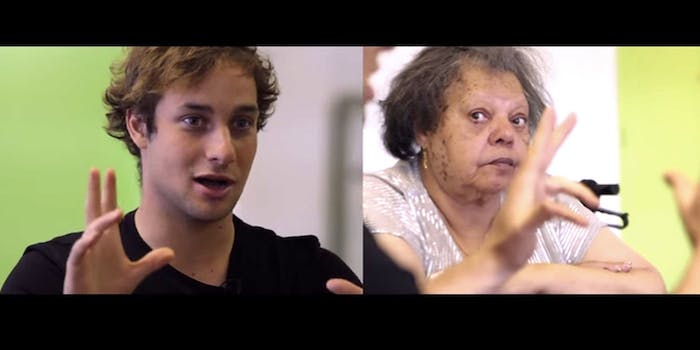 Millennial teaches senior citizens about Tinder and minds are blown

Some things about dating have changed, but some haven't.

If you’ve ever longed for the “good old days” of dating, watching a young’un teach senior citizens about Tinder will put things in perspective.

As part of Vanity Fair’s new Senior Orientation series, a millennial man showed a group of seniors at Fort Greene Senior Center in Brooklyn, New York, how to swipe right and swipe left, as well as what to do once you match with someone.

But Tinder isn’t just about the “horizontal mambo,” the millennial insisted. He has a friend who found a real relationship on the site! (The people who run Tinder’s Twitter account would be happy to hear this particular talking point.)

It’s particularly cute to hear the old folks reminisce on how times have changed. One senior explained how he used to have to go “hat in hand”  to pick up a young lady for a date and explain his intentions to her parents. But the other students were sure to make it clear that romance wasn’t so innocent way back when.

“People are more verbal now. They talk about things. They didn’t talk about it back then,” one senior said. Another added, “At the times, certain things like sex was a little more hushed up. Now it’s more open.”

One woman had the ultimate mic drop: “With men, it has always been OK for men to get as much as they can, whenever they can, wherever they can. The girls, they weren’t supposed to give their stuff up.”

For senior citizens, the world of online dating, and the Internet in general, is uncharted territory. In a documentary called Cyber Seniors released earlier this year, filmmaker Saffron Cassaday chronicled the challenges and victories of senior citizens at a home in

“[Using a computer] was just something I grew up with, like learning to walk or talk. I just figured it out,” Kascha Cassaday, Saffron’s sister and one of the founders of the titular Cyber Seniors program, told the Daily Dot. “[For seniors] it’s like learning a language so far down the line that it’s almost impossible.”

Vanity Fair‘s video shows us that even though online seems like a different language in some ways, in other ways the message is still the same.