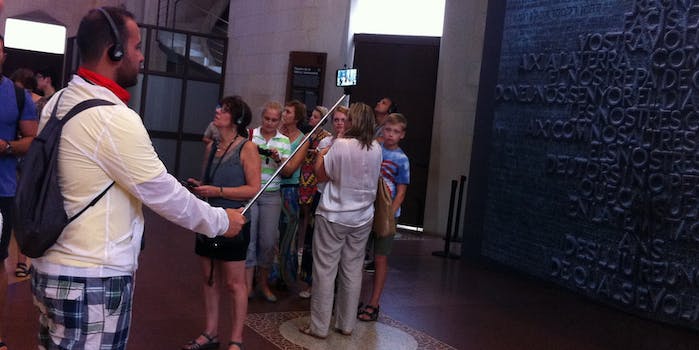 Photo via kristoferpalmvik/Flickr (CC BY SA 2.0)

If you're visiting a Smithsonian museum, it's best to keep your selfies stickless.

Next time you’re looking at priceless artworks at a Smithsonian museum, you should probably leave your selfie sticks at home.

Following in the footsteps of the Getty Center in Los Angeles and the Metropolitan Museum of Art in New York, the Smithsonian has now banned selfie sticks from all of its museums.

So the Smithsonian has expanded its original policy prohibiting tripods and traditional monopods to include selfie sticks. According to the Smithsonian website, the ban is “a preventive measure to protect visitors and objects, especially during crowded conditions.”

The Smithsonian wants to make clear, however, that its new policy does not signal the beginning of an anti-selfie movement. The website is clear that selfies are still encouraged at all Smithsonian museums, including the National Air and Space Museum and the National Portrait Gallery.

“We encourage museum visitors to take selfies and share their experiences,” the announcement states.

So the next time you’re at the Smithsonian, feel free to take as many selfies as you want with the Hope diamond. Just be sure to leave the stick in the car.