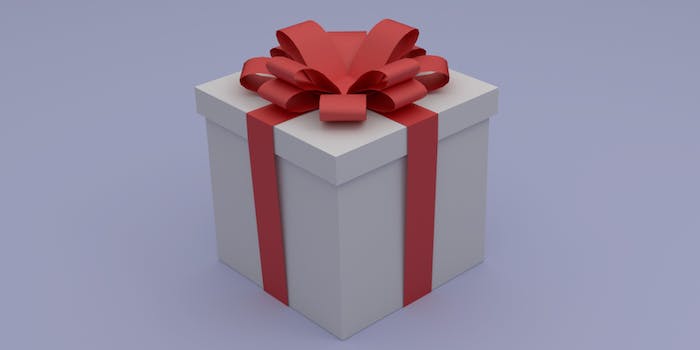 Don't be that person on Facecbook.

I’ve hated Secret Santa gift exchanges ever since Kindergarten. I ended up with a C-3PO stamp—a measly little Star Wars-themed school supplies item that most definitely did not meet the $10 minimum requirement. Even my best friend who absolutely loved Star Wars thought it was a lousy gift.

I was reminded of that event recently when I saw a Secret Sister Gift Exchange status on Facebook. They go a little something like this: 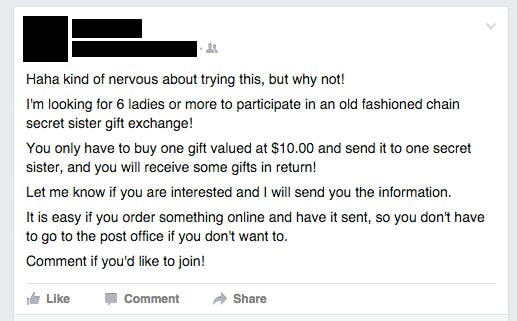 Sounds too good to be true? That’s because it is. To be quite honest, the fact that people are continually falling for it—pulling more people into this sinister scheme—is really quite ridiculous.

First off, any status that’s copied and pasted should be looked at with a skeptical eye—like those viral Facebook privacy policy statuses that always remerge from the lagoon of human gullibility.  And idea that you only have to give one gift to get multiple gifts should also raise a red flag.

In this viral Facebook gift exchange, essentially the poster recruits six other people. Those people recruited all send their gifts to that original Facebook poster, and then recruit six other people each to get a return on their investment gift. The only way to get something in return is by recruiting more people. So people at the top get a nice pay off if their underlings get underlings themselves and so on.

If that sounds a lot like a pyramid scheme, you’re not the only one to come to that conclusion.

“This is a typical pyramid scheme,” University of South Florida associate professor Kelli Burns told local ABC affiliate WRIC. “We’re just seeing this on Facebook this time instead of the old way of using letters, and Facebook allows it to spread a lot faster.”

Not unlike the pink Cadillacs and housewife parties of Mary Kay, the  “Secret Sister” gift exchange seems to prey on women who may be attracted by the notion of female friendship and camaraderie.

If you’re trying to plan a gift exchange with your besties this holiday season, ditch this Facebook Secret Sister Gift Exchange nonsense and just draw names from a stocking or use an online tool like Elfster.