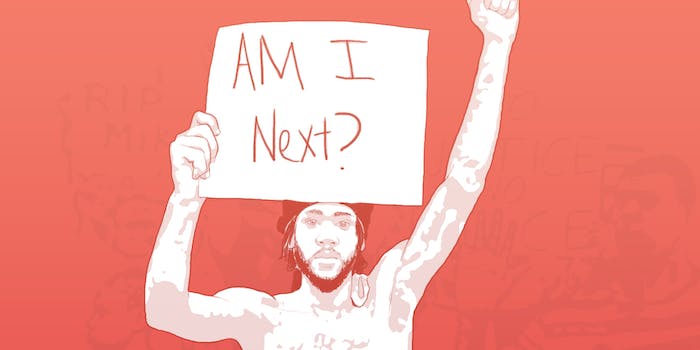 This time, no one was injured. But online threats show white supremacists may be responsible again.

For the second night in a row, gunfire disrupted the otherwise peaceful Black Lives Matter protest in Minneapolis.

Protesters had arranged a sit-in at Minneapolis’s 4th Precinct police station, where Black Lives Matter and other groups have been protesting the police killing of Jamar Clark since November 15.

According to the Washington Post, the Minneapolis Police Department confirmed that shots were fired at around 12:40 AM early Wednesday morning. Police arrived on scene and arrested one male suspect, whose name has not been released.

“The MPD did respond to a shots/shotspotter activation in the area near the 4th precinct at 12:40 am. (Near 1300 blocks Newton/Morgan),” wrote an MPD spokesperson in an email to the Washington Post. “No reports of injuries. Suspects stopped and id’d by officers. One male booked.”

Police also arrested four other suspects in connection with a Monday night shooting that left five people injured at the protest. One of those suspects was released, and the remaining three were charged with assault and are being held without bail. While police have not officially released the names of the three suspects in custody, news reports have identified them as three white Minnesota natives in their 20s: Nathan Gustavsson, 21; Daniel Macey, 26; and Allen Lawrence “Lance” Scarsella III, 23.

The alternative media source Unicorn Riot, which has been livestreaming the protest occupation of the 4th Precinct, posted a video of the shots being fired and of protesters reacting by laying down flat on the ground while cries of “get down” can be heard.

Shortly afterward, Unicorn Riot posted a short video on Twitter that showed police searching a nearby house and yard for bullet casings.

Earlier on Tuesday evening, members of the private subreddit group /r/kkk, a white supremacist forum, posted threats saying they would shoot protesters at 10:30 PM. Those threats were screengrabbed and sent to Black Lives Matter Minneapolis, which issued a warning to protesters via Twitter.

It’s unclear at this time whether the gunshots were related to the online threats. The Daily Dot reached out for comment to MPD, but did not receive comment about the second shooting on Tuesday night.