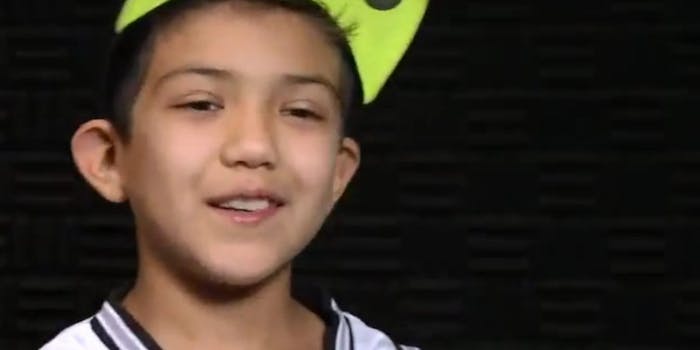 The kid with the golden voice has a golden response to his haters.

On Tuesday, 11-year-old Sebastien De La Cruz belted out a stirring rendition of the national anthem at the NBA Finals in San Antonio, Texas, only to be subjected to a sortie of racist attacks on Twitter. Though De La Cruz is San Antonio born and raised, many viewers simply could not comprehend that a brown-skinned kid in a mariachi outfit might be anything other than “Mexican.”

Like his “golden voice,” De La Cruz’s response to the haters is surprisingly mature.

Update: De La Cruz is coming back for an encore. You’ll hear him again Thursday night for Game 4.


In an interview with a local news station, De La Cruz—whose father is a Navy veteran—brushed off the attacks with grace and humility.

“I knew that one day when I sing that people were going to judge me,” he said. “That’s why over the time I’ve grown, I’ve learned that you don’t really care what people say about you, it’s what you think about yourself.”

Now take a moment to watch his performance from Tuesday. The kid nailed it: