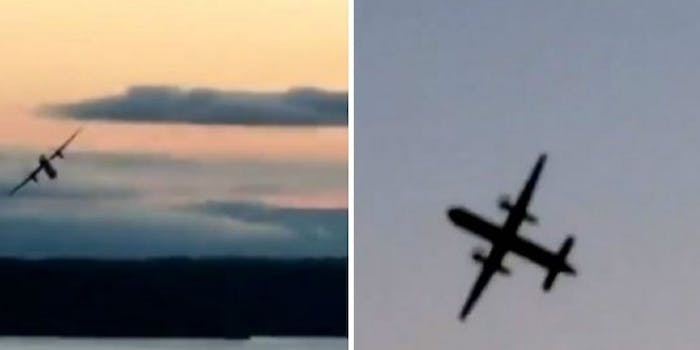 'Just a broken guy, got a few screws loose I guess.'

An airline employee stole an empty passenger aircraft and flew dangerously above the Seattle-Tacoma airspace before crashing near a nearby island and dying as a result, CNN reported. And video of the incident is startling.

The 76-seat aircraft took off without authorization around 8pm on Friday. The pilot reportedly was a 29-year-old airline ground service agent. Authorities have declined to identify him at this time, but audio recordings of his conversation with a control tower operator show him being referenced as “Rich.” No other individuals were on board.

The Seattle FBI office has stated it did not consider the incident an act of terrorism. The incident does raise questions in the airline industry about how a single person could manage to take off without being stopped beforehand.

“There is a protocol to not allow anyone singularly to get onboard an aircraft,” CNN safety analyst David Soucie said. “If you’re going to access the aircraft … you make sure that you check with someone else, and that someone else (will confirm) that … you have the right authority to get onto that aircraft.”

Multiple videos of the aircraft’s flight—along with audio recordings of the pilot’s radio conversation with the airport’s control tower—surfaced on social media. They paint a picture of a man experiencing a wide variety of emotions as the weight of the situation began to weigh on him.

“I’ve got a lot of people that care about me,” the man can be heard saying. “It’s going to disappoint them to hear that I did this. I would like to apologize to each and every one of them. Just a broken guy, got a few screws loose I guess. Never really knew it, until now.”

The local sheriff’s department described the man as suicidal but declined to elaborate at this time.

Shortly after the man lifted off, two F-15 military fighter jets were scrambled to follow the aircraft before it plummeted onto the nearby Ketron Island, between Tacoma and Olympia.

A man named John Waldron was nearby on the ground to record footage of the aircraft flying directionless. He also captured a glimpse of the F-15 jets following the aircraft.

The footage shows the aircraft slowly performing a barrel roll before nosediving, but the pilot pulled the aircraft up in time to continue flying.

A woman named Jensen Junka managed to record the aircraft flying low over a residential area.

#BREAKING Alaska Airlines says it is aware of an incident involving an unauthorized take-off of a Horizon Air plane from Seattle-Tacoma International Airport. This video was taken by a woman who lives south of the airport. She says this is the plane. (Courtney Jensen Junka) pic.twitter.com/Zh3E4aGfSk

Audio recordings show the man speaking with a control tower worker about his intentions to do a barrel roll. It quickly became clear that the man hoped the barrel roll would put him in an uncontrollable nosedive, but the footage showed the plane clearly angling back up.

“I think I’m gonna try to do a barrel roll, and if that goes good, I’m just gonna nose down and call it a night,” the man said. After the control tower operator acknowledged his maneuver and implored him to land the plane back at the airport, the man grows audibly distraught. “Alright, alright. Oh damn it, I don’t know man, I don’t know! I don’t want to, I was kind of hoping that was going to be it, you know?”

Some dude stole a plane from #Seatac (Allegedly), did a loop-the-loop, ALMOST crashed into #ChambersBay, then crossed in front of our party, chased by fighter jets and subsequently crashed. Weird times. pic.twitter.com/Ra4LcIhwfU

The plane crashed roughly an hour after it took off and did not hit any ground structures. At press time, there didn’t appear to be any footage of the actual crash.

“We’re working to find out everything we possibly can about what happened, working with the Federal Aviation Administration, the Federal Bureau of Investigation, and the National Transportation Safety Board,” Alaska Airline CEO Brad Tilden said in a statement. “We are giving those investigators our full support and cooperation.”