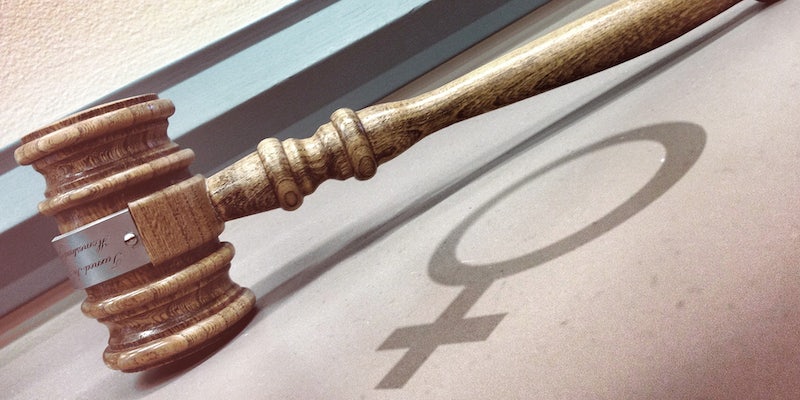 One of the most restrictive abortion laws in the country has been struck down, 5–3, by the U.S. Supreme Court today.

In 1992’s Planned Parenthood v. Casey, the Supreme Court ruled that a law is unconstitutional if it places “substantial obstacles in the path of a woman seeking an abortion.” But under the pretense of protecting “women’s health,” laws like HB2 have created what reproductive rights advocates see as medically unnecessary regulations for abortion clinics, and as a result, many clinics have been forced to close.

Whole Woman’s Health v. Hellerstedt was brought to highest court to determine whether two provisions of the Texas law—requiring abortion providers to have hospital-admitting privileges, and requiring abortion providers to have facilities comparable to surgical centers—actually do protect women’s health, or whether they place an “undue burden” on women seeking abortions. The court struck down both of those provisions.

“We conclude that neither of these provisions offers medical benefits sufficient to justify the burdens upon access that each imposes. Each places a substantial obstacle in the path of women seeking a previability abortion, each constitutes an undue burden on abortion access, Casey, supra, at 878 (plurality opinion), and each violates the Federal Constitution,” Justice Breyer said in the opinion delivered to the court.

The opinion continued, “The surgical-center requirement also provides few, if any, health benefits for women, poses a substantial obstacle to women seeking abortions, and constitutes an ‘undue burden’ on their constitutional right to do so.”

All day, pro-choice activists were protesting outside the Supreme Court, and tweeting under #StopTheSham and #KeepClinicsOpen.

Justices Roberts, Thomas, and Alito dissented to the opinion, with Thomas writing, “[Today’s] decision exemplifies the Court’s troubling tendency ‘to bend the rules when any effort to limit abortion, or even to speak in opposition to abortion, is at issue,’” quoting the late Justice Antonin Scalia in the dissent to Stenberg v. Carhart. “I write separately to emphasize how today’s decision perpetuates the Court’s habit of applying different rules to different constitutional rights—especially the putative right to abortion.”

Of the information SCOTUS reviewed, not included was an official account of how the laws affects Texas women. The ACLU has accused the Texas Department of Health Services of intentionally concealing such information, and according to NBC News, a state employee confirmed that was the case.

“The state did release a provisional raw number of abortions in 2014, which showed a sharp decline in the procedure, but the full figures would break down the data by procedure, gestational age, region, and race, which potentially corroborates the argument that the law poses an undue burden.”

The data that does exist show that many Texas women have been forced to travel out of state to obtain an abortion. According to ReWire, the number of abortions performed in Texas have declined since 2008. However, since Gov. Rick Perry signed HB2 into law in 2013, the number of Texans who traveled out of state to get an abortion jumped to more than the previous four years combined.

Before HB2, Texas had over 40 abortion clinics. Currenly, there are 10.

Since HB2 was instated, the National Abortion Federation hotline has been flooded with calls from Texas women, said Vicki Saporta, president and CEO of NAF, in a statement. “Too many of those women, after hearing how far they would have to travel to access care, simply said, ‘I can’t get there.’ Other women have made appointments, hopeful they could find someone to drive them, only to have to cancel at the last minute. We’ve even heard from women forced to spend the night in their car because they couldn’t afford a hotel or another roundtrip to the clinic. Hopefully, with this decision, new high-quality clinics will be able to open in Texas and throughout the U.S. and women will be able to access abortion care closer to home.”

Jessica González-Rojas, executive director of National Latina Institute for Reproductive Health, broke down how the ruling affects Texas’s Latina population. She said the organization was “thrilled” for the 5.1 million women of reproductive age in Texas, 2.5 million of which are Latina. “Latinos in Texas especially face high rates of disparities in terms of access to health care in general. One in three Latinos don’t have access to any health insurance, despite gains in ACA, so many of us are without basic care. And when Texas passed the defunding law in 2011, it shut down access to things like breast screening and pap smears.”

As for what happens next, González-Rojas says accessing abortions in Texas will still be difficult. “On paper, the clinics can reopen, but logistically it’s going to be a challenge,” and it will take time for clinics to renew leases, find staff, and hire providers. But she says that today’s ruling is unequivocally a victory for Latina women. “Eight out of 10 Latino voters support women’s access to reproductive healthcare without political interference,” she said.

Other reproductive rights advocates are also hopeful that the SCOTUS decision is a precedent to shutting down restrictive abortion laws across the country. “Today’s Supreme Court ruling is an historic confirmation of a woman’s right to make her own decisions about her health, her family, and her future,” said Dr. Willie Parker, board chair of Physicians for Reproductive Health, in a statement. “Politicians can no longer use ideologically driven laws with no medical basis to threaten women’s health by restricting access to safe, legal abortion care.”

Candice Russell, a Latina woman who shared her abortion experience in an amicus brief with the 1 in 3 Campaign to the court, told the Daily Dot, “From a personal level, I feel very validated.” She said she began working for reproductive rights after seeing Wendy Davis’ filibuster on HB2, and that day drove from her waitressing job in Dallas to Austin.

The decision is personal for Russell, who, because of HB2 restrictions, had to fly to California to obtain an abortion, and take out an installment payday loan to pay for it. She also suffered personal repercussions for the decision. “My parents haven’t spoken to me in two years,” she said, and she lost her job after a Supreme Court rally because her employers saw her on the news. “I have put my entire life and livelihood on the line, and what if I did it and women still couldn’t access healthcare?”

Looking forward, Russell said, “What I want for Texas and our nation as a whole is for reproductive rights to not always have to be on the defense.” However, she said she and other activists are inspired by today’s decision. “This is such a win, and we knocked it out of the park. If anything, we have more passion now.”

Update 1:54pm CT, June 27: Updated to include comments by Jessica González-Rojas on how the ruling affects Texas’s Latina population.