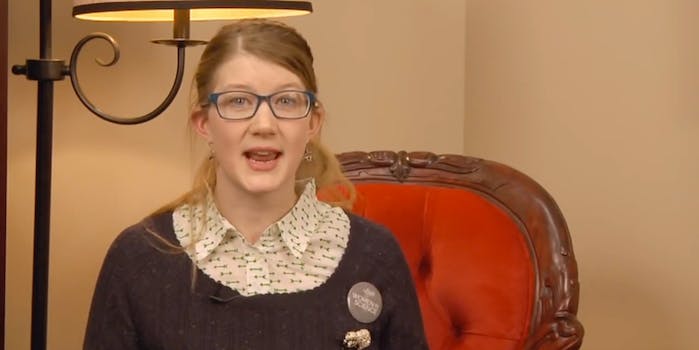 What’s preventing women like Graslie from finding the same audience as their male colleagues?

The Brain Scoop’s Emily Graslie is putting her sexist YouTube commenters on display.

As chief curiosity officer at the Field Museum in Chicago, Graslie showcases new items and various scientific topics on her channel. As a woman in one of the STEM fields, she’s a huge minority in the YouTube community.

So what’s preventing women like Graslie from finding the same audience as their male colleagues?

Her coworkers and associates have been nothing but supportive, she explains. But her online audience is a different story. She recruits Brain Scoop director and video editor Michael Aranda to read a few of her YouTube comments out loud:

Oh, and “You’d think this was a man’s job. Not just two beautiful ladies.”

These commenters are more focused on Graslie’s physical appearance than anything she has to say about science or natural history. Not only has it caused her to criticize herself, it has prevented her from letting more people onto her channel because then they could see the sexist comments that people write.

This wave of sexism, which many chalk up to “being the norm” and “not a big deal,” can discourage other women from starting their own channels. Many of Graslie’s viewers have expressed that they were interested in watching more female STEM YouTube channels but didn’t know of any besides her and ViHart.

“We need to make sure we’re making it possible for people of all genders to be acknowledged for their contributions and not feel held back for something as arbitrary as their genetics or their appearance,” she explains.

And ignoring this won’t make it go away.

H/T The Frisky | Photo via thebrainscoop/YouTube