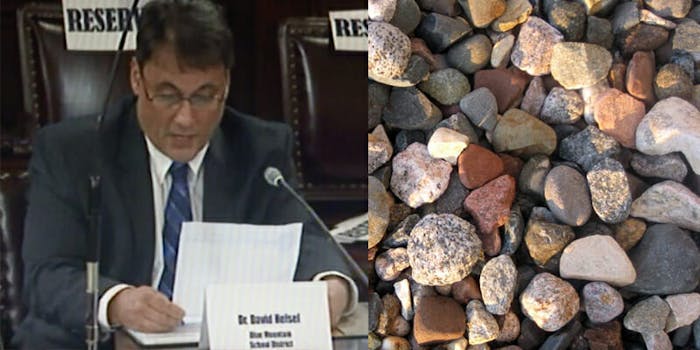 Shooters 'will be stoned.'

A Pennsylvania school district has directed its students to arm themselves against school shooters—with rocks.

“Every classroom has been equipped with a five-gallon bucket of river stone,” Helsel said. “If an armed intruder attempts to gain entrance into any of our classrooms, they will face a classroom full of students armed with rocks and they will be stoned.”

The proposed safety “solution” may come like a rock to the face for gun control supporters, thousands of whom across the country will come together Saturday for the March for Our Lives. Activists are demanding that lawmakers consider higher age restrictions and stricter background checks for people buying guns, among other measures.

It’s unclear if Helsel believes a fistful of stones will be able to protect students against assault weapons like the AR-15 used in the shooting last month at Marjory Stoneman Douglas High School in Parkland, Florida.

But, one student reportedly conceded, “rocks are better than books and pencils.”

“They’re the right size for hands, you can throw them very hard, and they will create or cause pain, which can distract,” Helsel said.

Advertisement Hide
The buckets of rocks are just the latest idea meant to combat gun violence as Congress fails to pass meaningful gun control legislation. Earlier this month, a Republican proposed fire extinguishers as a “deterrent” against shooters, and the administration at Marjory Stoneman Douglas is requiring students to carry clear backpacks when they return from spring break.
H/T Vice News
Share this article