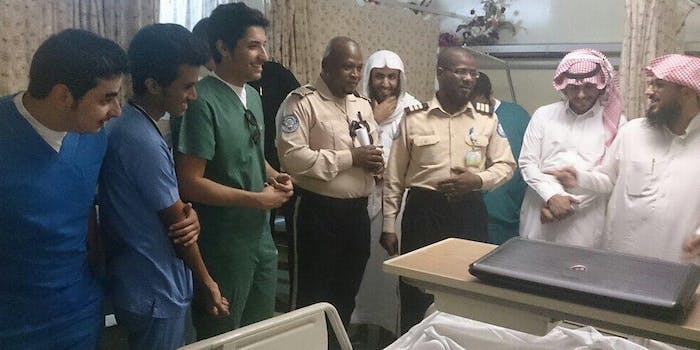 Desparate and alone, a Saudi Arabian man took to Twitter for help with his needed bone-marrow operation.

A car accident over a year and a half ago had left a Saudi Arabian man bed-bound and paralyzed in the country’s capital of Riyadh. Ibrahim had been without a visitor to his room at the King Khalid University Hospital for months, his family had stopped caring for him, and the only slim chance of hope he clung to was a $130,000 bone marrow operation in Germany.

But with a few simple tweets, all that changed.

The Saudi Gazette reports that Ibrahim, who goes by the handle @glaad2007, tweeted the following from his hospital bed on Saturday night:

“My name is Ibrahim, and I am hospitalized at King Khalid Hospital. I had a car accident which left me paralyzed and I have no one to visit me. My father and my brothers have ignored me all this time. I also have another wish. I wish someone could help me get treated for a bone marrow transplant in Germany.”

While Ibrahim only dispatched his first tweet on May 10, he quickly became a Saudi social media sensation.

After tweeting pleas for visitors, the hashtag #زيارة_ابراهيم , which translates to #VisitingIbrahim or #VisitIbrahim, was tweeted over 250,000 times. His story quickly gained traction, and he was inundated with queues of visitors almost overnight. He was showered with flowers, food, and the warm spirit of strangers, some even feeding him due to his medical state. The outpouring of support was so overwhelming that the hospital had to place a temporary hold on visitors because of the demand to visit Ibrahim.

Perhaps the most generous of Ibrahim’s guests was Prince Alwaleed bin Talal, who, according to ArabBusiness.com donated half a million riyals ($133,000) to pay for the bone marrow transplant Ibrahim had pleaded for on Twitter.

“A special thank you to HRH Prince Waleed bin Talal for his support and his donation of half a million riyals.”

The outpouring of support for Ibrahim still continues, with his Twitter account cataloging his numerous visitors and unceasing messages of supports and recovery.