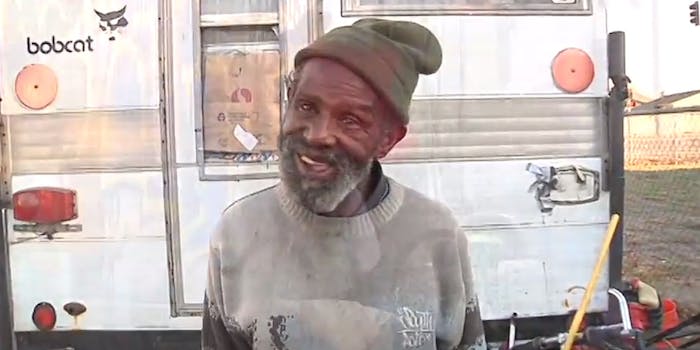 After 40 years, homeless man receives an inspiring visit from an unlikely old friend

“You don’t know how hard I prayed to get to see you."

They once called Marcus Malone “the Magnificent.”

His fiery conga rhythms were an early driving force in Carlos Santana’s Latin psychedelia. He’s described as “a ‘showboat’ player from the Aquatic Park scene who contributed an African underpinning” to the band’s electric fusion in Voices of Latin Rock: People and Events that Created This Sound. But Malone was forced to quit the band in early 1969 due to personal issues, not long before the band’s breakthrough at Woodstock.

The footage found its way back to Santana, and after 40 years, the two were reunited on camera. It’s inspiring to watch.

“You don’t know how hard I prayed to get to see you,” Malone tells Santana.

It’s not clear what’s next for Malone. One would hope that given his resources and immeasurable success, Santana—whose core band, not including Malone, was inducted into the Rock & Roll of Fame in 1998—could help the struggling drummer get back on his feet in a more meaningful way than a quick visit. Santana does mention something about “hooking up” and offers some encouraging words:

“His spirit is indomitable.”

You can hear Malone in his prime on Santana’s Live at the Fillmore 1968, a scorching double album with original drummer Bob Livingston that premiered most of the material that would appear on the band’s groundbreaking debut LP. The closing ecstatic 30-minute rave on “Freeway” is, in a word, magnificent.