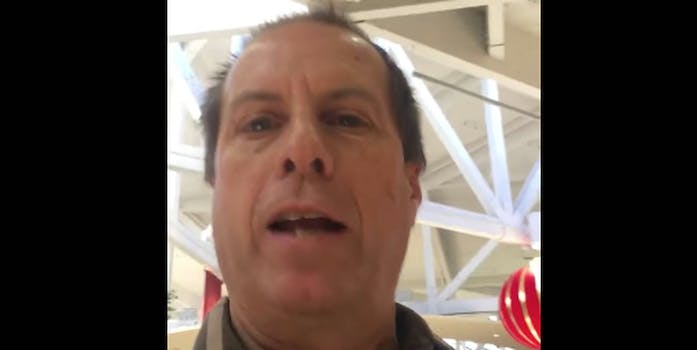 He was confronted by some pissed-off parents.

A pastor in Texas just ruined Christmas for a bunch of kids waiting to see Santa.

David Grisham of Last Frontier Evangelism filmed himself at Amarillo’s Westgate Mall where he sought to teach kids “that Christmas is about Jesus Christ.” But instead of singing carols or spreading the gospel, he confronted a long line of kids waiting to sit on Santa’s lap.

“Kids, I want to tell you today that there is no such thing as Santa Claus,” he says in the video, which has been viewed over 2.4 million times on Facebook. “The man you’re going to see today is just a man in a suit, dressed up like Santa, but Santa does not exist,” he continues. “Santa’s not real. And parents, you all need to stop lying to your children and telling them that Santa Claus is real when in fact he’s not.”

Grisham removed the video from his Facebook page Monday morning, but a mirror is available on YouTube.

Several parents confronted Grisham and asked him to leave. “I’ve got my kids over there, we don’t need you coming over here blabbing whatever it is you’re blabbing,” one concerned parent tells him.

When the man puts his hand on Grisham, the pastor claims he’s being “assaulted,” a complaint he repeats in his description of the video on Facebook.

Editor’s note: This story was updated to include the YouTube mirror.