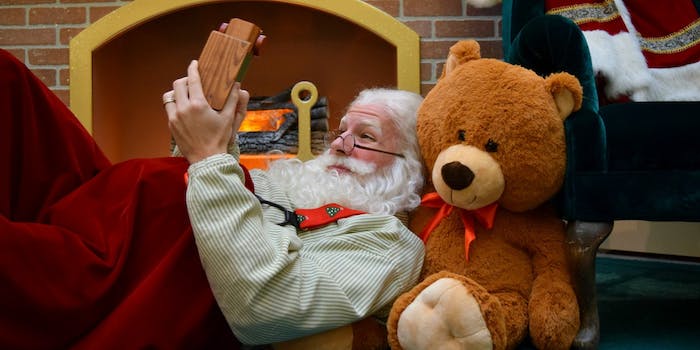 'This has had the biggest impact on my heart.'

Caleb Ryan Sigmon immediately knew what the man inside the Athens, Georgia, mall wanted. The man held a picture frame in his hands and turned it around to show Sigmon the photograph of a baby. The man had trouble speaking, but Sigmon, who was dressed as Santa Claus, realized exactly what was happening in that heartwrenching this moment.

The man had lost his child—the baby in the photo—but wanted his son to pose for a picture with Santa.

“Rather than putting him in a situation where he had to ask an incredibly hard question, I jumped in to help him,” Sigmon told the Daily Dot in an email. “I wanted him to know that I was beside him in this. I have experienced lots of emotional moments as Santa, but this is the most memorable and has had the biggest impact on my heart.”

Sigmon is not the typical older gentleman you might be expecting, but he has wisdom beyond his years. And when the father who had lost his baby son, Hayden, arrived earlier this month for a photo with Santa, it didn’t matter that, at age 23, Sigmon is at least three decades younger than many of his Santa contemporaries. He knew just what to do. As he wrote in a Facebook post that has since gone viral:

Without anyone saying anything, he handed me the frame and I placed it on my knee. In the photo, I could see on the little boy’s armband that his first name was Hayden. I didn’t ask any questions, but I am guessing that this is his first photo with Santa.

After Sigmon posted the story on his Facebook page, it went viral, amassing 87,000 likes and more than 56,000 shares. He realized its significance when the father sent him a message emphasizing his family’s gratitude for the recognition of the moment.

Sigmon grew up in Hudson, North Carolina, a small town in the foothills of the Blue Ridge Mountains, and married his high school sweetheart, Katy. They’ve lived and worked across the Southeast; Katy is a costume designer and a wig/makeup artist and Sigmon has a background in theater.

Sigmon first began acting as Santa when he was 3 years old in his Mamaw’s living room. A few years later, his grandmother made him his own Santa suit and he dressed up as St. Nick for chorus concerts in elementary school. When he was a senior in high school, he got his first professional gig dressing as Santa at a tree lighting and festival in North Carolina. From there, he was hooked.

“Dressing up and playing a role has always been in my blood,” said Sigmon, who’s also an illusionist and storyteller. “My dad worked with Santa for a good number of years alongside my mom, doing home visits free-of-charge. He passed it on to me. You could say that I have been doing this for 20 years.”

This is Sigmon’s second year working in a mall, and he loves it. Katy helps with his makeup, a process that takes about an hour, and though he estimates he’ll work 400 hours from the two weeks before Thanksgiving until Christmas Eve, he loves his job. And he loves dropping little stories on his Facebook page in a series he calls, Stories From The Big Chair. (He said he obtains permission from parents before posting photos and specific names on Facebook.)

“Lots of my friends knew that I did this, but I wanted to share some of the stories with them,” he explained. The story about baby Hayden and his father one that Sigmon just knew was special. “I knew it had really been widespread online once the father sent me a Facebook message,” said Sigmon. “We had a great conversation and have stayed in contact. His family is very glad that Hayden’s story is being shared and that it is touching peoples’ lives. I am very glad, too. It is a story that needs to be told.”