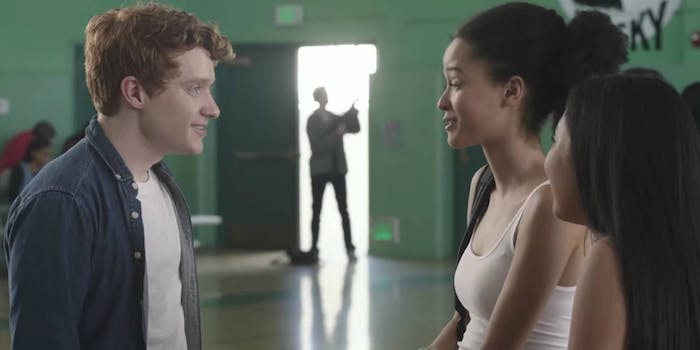 There's more than one story taking place in this video.

Sometimes, the details are the most important part of a story. That’s what Sandy Hook Promise hopes you take out of the following PSA, which features the tale of how a boy and girl meet in high school and potentially begin a relationship.

On the outskirts of the couple’s anonymous courtship, there’s another story you’re likely missing.

Before you press play, you should know you’re watching what will be a shocking turn of events.  Even though you know you should be looking for clues during Evan’s courtship—and you’ll probably find a few them before they’re explicitly pointed out—it’s difficult to spot them all.

The sweetness of the awkwardly blooming love story mixed with the shock value of the student cocking his gun in a crowded gymnasium is exactly the point for Sandy Hook Promise—which is led by family members of the children killed in Newtown, Connecticut, in 2012. The organization aims to provide “programs and practices that protect children from gun violence.”

“We wanted to create an impactful visual to show that violence is preventable if you know the signs” Nicole Hockley, co-founder and managing director of Sandy Hook Promise, whose first-grade son, Dylan, was killed at Sandy Hook, told CNN. “Many people are unaware of that there are specific signs that people give off that can indicate a violent act is imminent.”

There have been hundreds of mass shootings in the years since 20 elementary school children were killed at Sandy Hook. In that same time period, there has been no new gun-control legislation passed on the federal level.

“We want this video to inspire hope in those who watch it,” Hockley said, “to show them that we are not helpless in the face of gun violence and that there is something all of us can do to prevent it.”