But now, the Internet is coming to 3-year-old Samara's rescue.

The Internet came to the rescue of a 3-year-old Aboriginal girl after she was subjected to racist comments and told she couldn’t dress up like Queen Elsa from Frozen.

Last month, Rachel Muir took her daughter Samara to a Disney-themed event at a shopping center in Melbourne, Australia, where she dressed like the Disney character. A woman and her two daughters confronted them after they had been in line to tell Samara she wasn’t allowed to dress like Elsa because she was “black.”

One of the woman’s daughters also allegedly told Samara that “you’re black and black is ugly,” prompting Samara to burst into tears and ask her mother why her skin was that color.

Muir wrote about the incident on May 31 and lamented how racism was still alive along with a picture of Samara dressed as Queen Elsa. 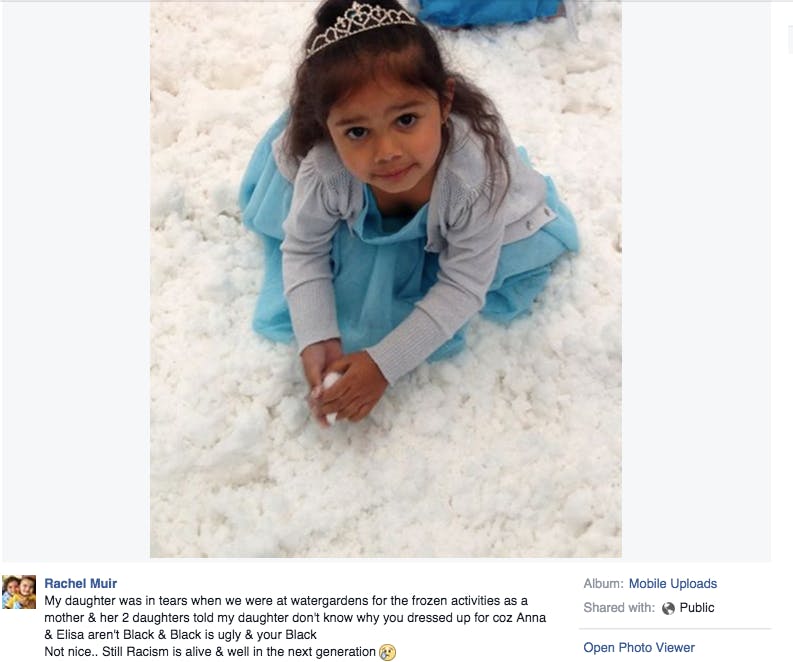 Muir eventually made a complaint to the shopping center’s manager, who called the woman’s behavior “unacceptable.”

Since posting the picture on Facebook, Muir has fielded hundreds of comments and messages from well-wishers around the world calling Samara beautiful and a “queen.” Rapper Adam Briggs has invited Samara to be in one of his music videos.

Once Samara made the front page of The Courier, her story spread even further.

Sine Samara’s story has gone viral, she has returned to her usual “proud, beautiful Aboriginal self.”

“I can’t express how much it has meant to us,” Muir told The Courier. “I just thought it would be a story people would click past and forget. To know that she has touched so many people … that they see her how I see her, is just incredible.”

Update 10:15am CT, June 25: As her story traveled around the world, Samara got perhaps the most ringing endorsement of them all: from Elsa herself. According to the Age, former Disney employee (and Elsa impersonator) Meghan Hope sent a video message to the aspiring princess, reminding her to be herself and “let it go.” “Disney is about bringing magic to those who need it most,” Hope told the Age. Mission accomplished.