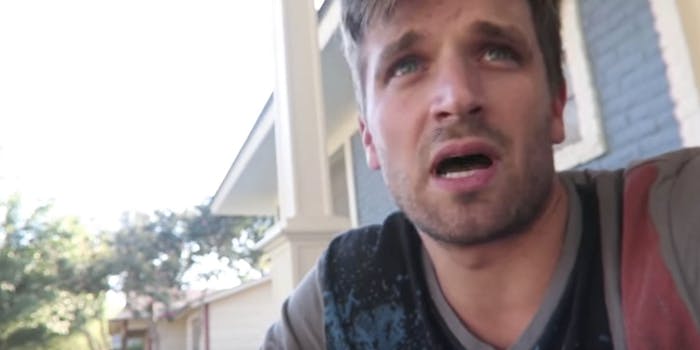 Sam Rader says he has to address the "hater-ade."

Sam and Nia are “done with the haters.” Alas, they are not so done that they won’t address the “hater-ade” head-on.

In a new video released Friday, Christian vlogger Sam responds to allegations that the recent pregnancy announcement and subsequent miscarriage were staged. He now wants everyone to know the joyous news and crushing disappointment were staged—by God.

To recap, on Aug. 5, Rader posted a video in which he surprised his wife with the news of her own pregnancy. He found this out by stealing some of her urine. Yet three days later, the couple posted another video to reveal that Nia had miscarried. It was emotional. It was dramatic. It felt…off.

The Internet has been awash with theories that Sam and Nia faked the entire narrative for attention. This third video addresses the controversy while they defend themselves from being “persecuted.”

First, we get a brief message from Nia and their two children (as well as some random commentary from a Christian family friend who opines that there’s an “anti-family and anti-children movement” in this country).

Then Sam, bleary-eyed, launched into a self-filmed tirade to address the people trying to drag his nice Christian family through the mud.

I know it may seem like I’m giving a little too much attention to the people that’s drinking the ‘hater-ade’ out there, but I have one final statement for them, ‘kay, and that’s it. The un-acceptance that this world has shown our family has actually been a blessing to me. Let me explain…it seems as though the media out there, all the articles being written about us, are trying to put us in a bad light for the most part. And I feel like those are the ones that represent the world. And it makes me think of the verse John 15:19: “If you are of the world, the world will love you as its own. But because you are not of the world, but I have chose you from the world, the world hates you.’ I just think that’s so amazing. ‘Because I chose you, the world hates you.’ God told us we’re going to be hated, so what we’re seeing right now is god’s will being played out for our lives as Christians. We’re being persecuted somewhat. This is what God told us is gonna happen, so I can’t help but let it excite me.

But watching Sam Rader, he doesn’t look too excited. He goes on:

So the world is choosing to be deceived, and there’s nothing we can do about it. That’s why I’m not trying to defend myself to anybody. Anybody who asks me, “Was it fake?”—I don’t even feel like responding to it, but no, it wasn’t fake. That’s pretty much all I’ll say.

And he addresssed, once and for all, whether all the pregnancy hoopla was a fraud.

Or, like, one interviewer asked me, “Was it all staged?” A lot of people think it was staged. I’m, like, you know what? It was staged. It was all orchestrated by God above and nothing less. I’ll say stuff like that just to kind of throw them off, but it doesn’t make me happy that people are deceived, but it does make me happy that God chose our family out of the world.

So there you have it: God staged everything.