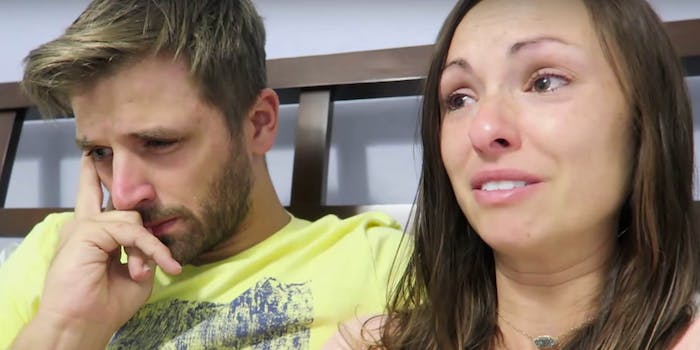 Viewers are very conflicted about the new clip.

Last Wednesday, the Internet dissolved into a mixture of teary joy and unwavering skepticism after popular family vloggers Sam and Nia Rader announced the results of a pregnancy test with a clip that now has more than 10 million views. On Saturday, they followed it up with some awful news.

In a clip titled “Our Baby Had a Heartbeat,” the Texas couple announced they’d apparently spoken too soon: Nia had a miscarriage.

The initial announcement video had all the right moves: The Internet loves proposals and pregnancy announcements, because we can live vicariously through someone else. It had the surprise aspect, even though the pregnancy test was used in a rather dubious fashion (stealing her pee from the toilet). And Sam and Nia, who have more than 300,000 subscribers on their main channel, are a good-looking couple, and that makes the viral hits come even faster.

It seems their fans truly enjoy living vicariously through the couple, and the miscarriage video got many of them right in the gills. But then came the cynics: Was it real, or were they attempting to capitalize on the momentum?

The comments on the followup video are, unsurprisingly, split. Many believe the couple concocted the pregnancy/miscarriage plot for more views. Others argued about when a baby actually has a heartbeat, whether the couple is using the video as a platform to spread their religious views, and why they decided to monetize a clip of such devastating news. Some are sharing their own miscarriage stories.

Oh my i am so so sorry. I loved your announcement and was so happy for and with you. Its been almost 18 yeara for me and it never goes away. It does get easier and the pain gets less and less as the years go by. I hope you guys are ok.

Fake fake fake. No tears, put on sad faces, dramatic and deliberate sentences and most of all posting it on youtube for the world to see straight after ‘it happened’ come on guys i know your channel is boring but faking a pregnancy announcement video that was awfully staged and then staging a miscarriage video to get sympathy votes? Low. Real low

This is a terrible loss. But this is exactly why people usually wait until a 12 week scan to tell people that they’re pregnant – complications. Now their pain is very public and they have thousands of people speculating in the comments over the legitimacy of their story. Not to mention having to explain to their very young children horrifying things like this in such a short turn around. Please, if you conceive again, as much as you would want to share with us viewers, keep it as your secret until you know for certain that everything is healthy and well!

The couple has made much of their personal and family life—and their religious views—public via their blog, but the pregnancy announcement video didn’t sit well with the more skeptical Internet audience. It played out like it was orchestrated to go viral, even down to the title; Sam turns the tables and tells his wife the good news. But there is something depressing about Sam asking their daughter what she’s most excited about (mom holding the new baby while cooking) and Nia responding, “I can’t even handle it because those are the things that scare me the most. Having to still cook dinner with a newborn.”

This isn’t the first time the couple has been the focus of controversy. Last month, a Change.org petition started circulating, asking YouTube to drop Sam and Nia from their NatureBox sponsorship after posting a now-private video in which their daughter, Symphony, reacts to the same-sex marriage ruling. It also cited a homophobic comment made by Sam’s brother. The couple apologized the next day. Sort of.

Symphony believes that homosexual couples should be able to marry “if they want to.” Unhappy with the answer and despite her being visibly uncomfortable, Sam goes on to coerce her into agreeing gay marriage is wrong by carefully rephrasing his questions and replacing man/woman with more specific “daddy” and “mommy” labels, knowing that those exact words [have] a greater personal significance to a child of her age and will elicit the proper response he wanted to capture from her on video. It is truly sad to see this kind of intolerance taught to our younger generation.

“The Bible says to weep with those who weep and mourn with those who mourn, and I am mourning with those of you who are feeling this,” Nia says in the miscarriage clip. Yes, there is power in talking about an experience many women don’t know how to cope with—or don’t think they should. As Nia is trying to do just that, after saying she blames herself for the miscarriage, Sam interjects: “I just hope this video continues to be a way for God to shine his light to the world through us.”

Our tiny baby brought 10M views to her video & 100k new people into our lives. She turned our life around & brought us closer together.

Debating whether or not a woman’s miscarriage is real is another way to minimize her as a person, but perhaps that misses the bigger picture. There’s something unsettling about the power balance here: taking your wife’s pee out of the toilet, talking over her pain, telling your young daughter her views on gay marriage are wrong. His wife literally tells him she’s scared about “having to still cook dinner with a newborn” in the pregnancy announcement. That video was praised as adorable, but is it?Screengrab via Sam and Nia/YouTube