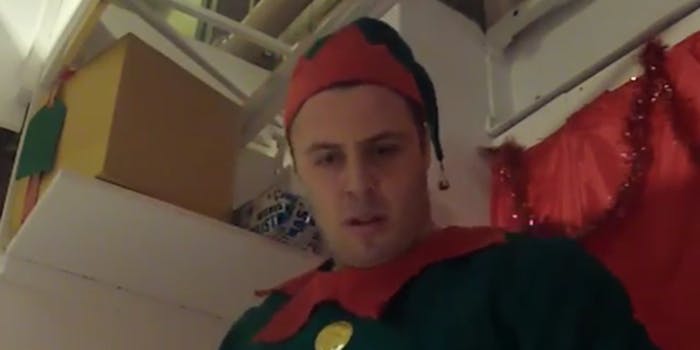 Actually, Sam Briggs is no Hunter S. Thompson, but he is British.

Last year, British writer Sam Briggs ingested ecstasy, shrooms, and weed, took to the streets to give “safety advice,” and filmed the whole thing. It was funny, especially because Briggs is British, and as his intake increased, so did the anthropological magic.

This Christmas, he raised the bar on public intoxication, and ingested ketamine, cocaine, and LSD, then once again set off for his “job.”

In “Drugs at Work 2,” Briggs manned a gift-wrapping booth over the course of two days, during which he ingested the drugs. First, he does coke. “I feel good,” he says. “Maybe I should do a bit more.”

He then drops some LSD. Suddenly, his previous chattiness is gone. He’s still allowed to wield scissors, though. He attempts to readjust his elf belt, which might be the best part of this section. He doesn’t seem to be getting many customers, which might be attributed to the fact that he’s laughing maniacally. Time for some ketamine!

Under the influence of an animal tranquilizer, Briggs still seems fairly lucid. As in, he’s still standing upright and hasn’t shed his clothing because it’s made of spiders.

The video is entertaining, but is there any big truth revealed about these drugs? Not really. Hunter S. Thompson he is not. However, Briggs has done some equally hard-hitting anthropological work, including idenitifying the five different types of stoner.

The money from the wrapping booth went to charity. What drugs will Briggs possibly do next year?