'Blinks of Bicester are no longer taking bookings from anyone from the Islamic faith.'

In the aftermath of Friday’s terrorist attacks in Paris, Facebook and Twitter have been flooded with racist and Islamophobic responses. Now, at least one woman has been arrested for going a step too far.

The Telegraph reports that over the weekend, the Facebook page for the British eyelash salon Blinks of Bicester posted that her business would no longer serve Muslim clients.

“Blinks of Bicester are no longer taking bookings from anyone from the Islamic faith whether you are U.K. granted with passport or not,” read one post. “I hope your families get blown up by ISIS,” read another. 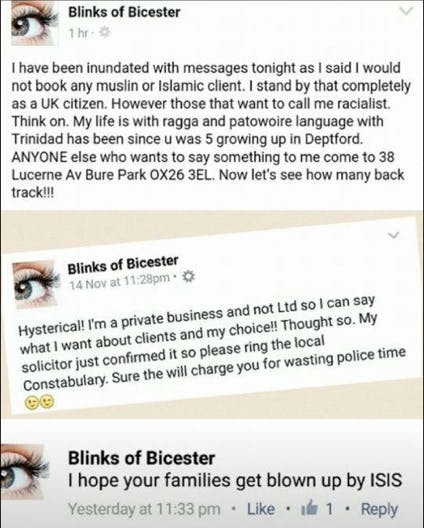 Quickly, the Blinks of Bicester page filled with angry comments  from people who do not want Islamophobia as part of their beauty care regimen. “You need a rebranding after your vile comments. I think ‘Bigots of Bicester’ would be very appropriate,” commented Linda Stubbs, according to the BBC.

Some people were so bothered by the Facebook posts that they filed reports with the Thames Valley Police Department. The police took action quickly; yesterday, they arrested the 43-year-old woman who they believe is responsible for posts under Section 19 of the Public Order Act which prohibits “written material … with the intent of stirring up racial hatred.”

The woman was released on bail today until November 30.

Though the official Facebook page for Blinks of Bicester has been deleted, the protest page I won’t be using “Blinks Of Bicester” was launched this morning.

Photo via Mainstream/Flickr (CC BY 2.0)