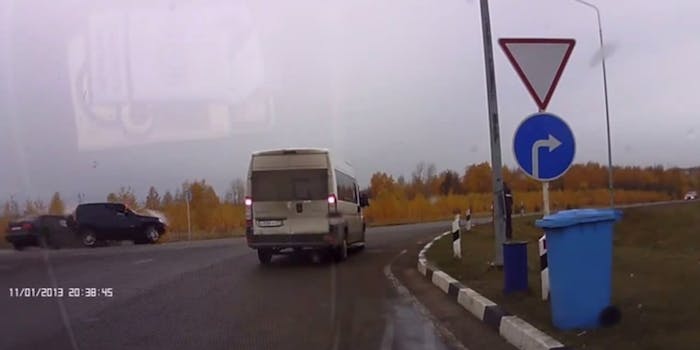 This Russian dash cam video is basically a PSA for seatbelts

Those seatbelt warnings exist for a reason.

The latest Russian dash cam video provides a terrifying example of what can happen in an accident if the driver is not wearing a seatbelt.

YouTube user Sparkinter82 uploaded the video, which took place at a semi-busy intersection. As a vehicle to Sparkinter82’s left attempts to make a left turn, an oncoming vehicle plows into it, ejecting its driver right through the window. Don’t worry: the video shows no gore and the driver is obviously all right.

Sparkinter82’s amazing capture has over 33,000 views and easily reached the front page of Reddit’s r/videos community.

“I just can not believe people willingly don’t wear seat belts. Every single safety device in the vehicle might as well not be there if you don’t have your seat belt on. They design the front of the entire car to crumple and absorb energy for you, and you can’t buckle a damn seat belt?” redditor redtracer said.

Safety first, everyone. Not all ejections end so cleanly.