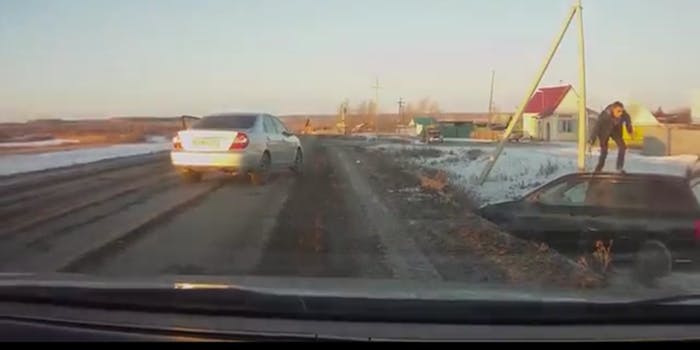 The nearly four-minute clip is riveting, hinging on the will-they-won’t-they rom-com plot device.

Think about the last time you experienced road rage. Did you shrug it off? Extend a middle finger? Did you try to fight the other driver with a shovel?

The latter is what happens in this latest example of insane Russian dash cam footage.

For nearly four minutes, we watch a possibly neutral third party follow the car chase theatrics of a pair of angry, weapon-wielding drivers. The video hinges on the will-they-won’t-they rom-com plot device, but applied to Russian road rage. The last 30 seconds or so is the real magic. That’s when you realize one driver has a shovel, and that in addition to hittting the other man with it, he adds insult to injury by shoveling snow at him.

The other best part is when the driver filming the whole thing politely taps on his horn, as if that will tear these two men away from their knife-shovel duel.