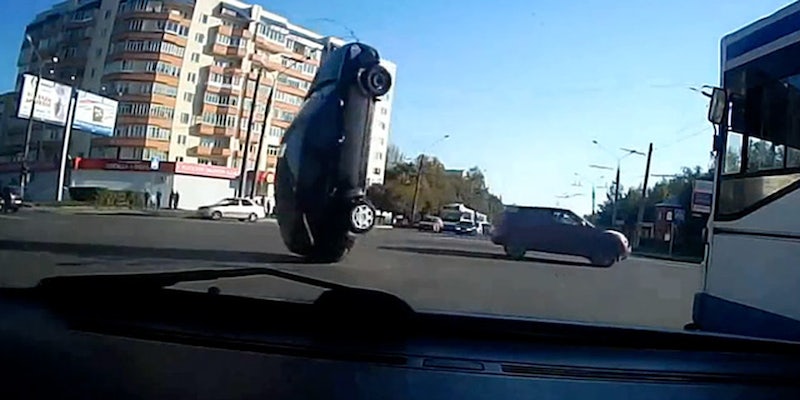 The fast, furious, and funny: Behind Russia’s dash cam culture

Russian dash cam videos have become a unique subgenre of online entertainment, but they emerged entirely out of necessity.

In Russia, most automobile owners have only basic liability insurance, and courts are unlikely to award a payout without clear photographic evidence. Known officially as “videoregistrators,” the cameras offer a cheap and reliable method for drivers to protect themselves against insurance scams, hit-and-run accidents, and aggressive motorists. As such, a roughly $300 gadget makes for a worthy investment.

The prevalence of the cameras has curtailed the once-bustling business of insurance scammers, who’d make a weak attempt at pretending to be hit by a car and then demand cash from the driver. There were more aggressive schemes, too. Scammers would often work in teams, with one bumping an already dented car into an unsuspecting driver and the others emerging as witnesses to intimidate the victim into admitting fault and paying up.

Like the police scanners and Cops footage before it, dash cams have amassed a cult audience online. There’s a small but active Reddit community devoted to the footage. YouTube is rife with it, and many clips have been turned into GIFs. The definitive collection of dash cam videos can be found at RU-CHP, a LiveJournal blog started in January 2011. That same year, searches for “videoregistrator” (????????????????) on the Russian search engine Yandex nearly doubled. Since its inception, RU-CHP has accumulated over 11 thousand entries and more than 900 thousand comments.

The acronym CHP (?? in Russian) stands for “???????????? ????????????,” which means “emergency.” The blog takes a fairly somber approach to the videos, treating them more as a warning to motorists than as fodder for gawking. Gawkers, of course, are aplenty; the blog ranks eighth overall in Russia’s still-active LiveJournal community.

These videos certainly paint a very specific—and terrifying—portrait of life on the Russian road. While it’s true that the roads are snowy and the cars are fast, a trip down a Russian motorway isn’t the suicide ride it’s made out to be. In terms of per capita traffic-related deaths, Russia ranks somewhere in the middle, with 19.5 deaths per 100,000 inhabitants in 2012. The U.S., in comparison, fared slightly better. The latest statistics show 12.5 traffic-related deaths per 100,000 people. Both however paled in comparison to the most dangerous country for drivers, Eritrea, coming in at 48.4 deaths.

Most of the footage caught on dash cams is actually quite dull: the open road, a bit of pop music coming from the radio, and nothing exciting for miles around. But on rare occasions, dash cams have not only captured news in the making—they’ve been used almost as a citizen-journalist tool.

The cameras have captured footage that will go down in history , footage that would have otherwise been missed. Most notably, dash cam footage played an integral role in the media’s reporting of the meteorite that exploded over the city of Chelyabinsk in February.

It’s that sort of truly unusual stuff that makes it big online. When it comes to dash cams, viewers want a thrill.

For the full spectrum of emotion that only a dash cam video can deliver, here’s a truck full of cows tipping over.