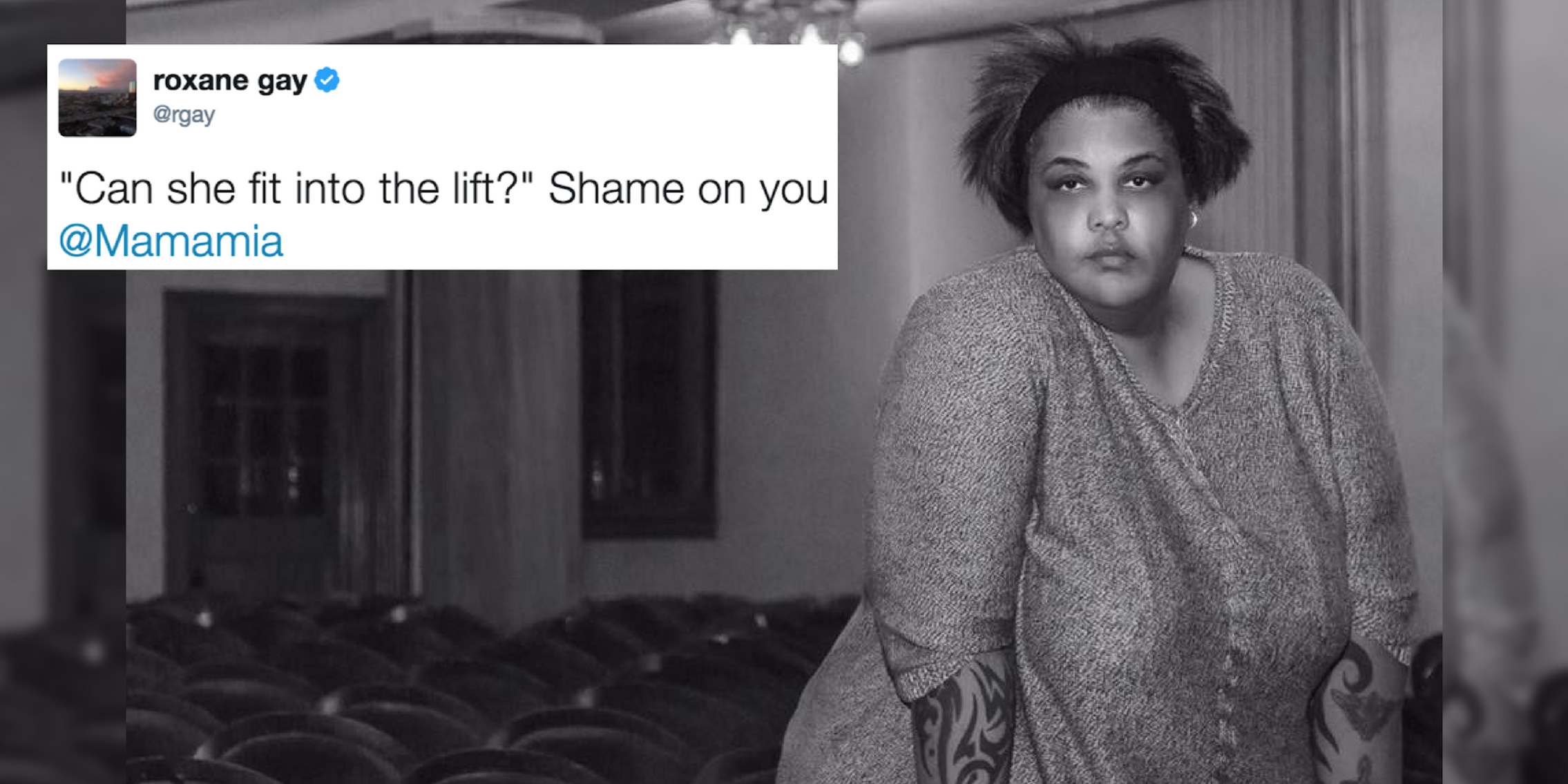 'Will she fit into the office lift? How many steps will she have to take to get to the interview?'

Somehow “a dozen exchanges” to arrange an interview with Australian website Mamamia led to a breach of confidence, a poorly-thought-out introduction, and a “cruel and humiliating” experience for author Roxane Gay.

On Monday, the self-proclaimed feminist website helmed by journalist Mia Freedman published a podcast interview with Gay, who was promoting her new book Hunger: A Memoir of (My) Body. Gay’s latest novel expands upon ideas she’s discussed in interviews and on Twitter before: the anxiety and humiliation that comes with existing in a world that deems you take up too much room, and won’t accommodate your experience.

However, despite these being topics that Gay shares in her memoir and even makes an example of during her Mamamia interview, Freedman, who interviewed Gay for the podcast, fixated entirely on this point in her interview intros both in the podcast and in a post online. It was something that Gay’s fans found to be demeaning and deeply problematic.

“A lot of planning has to go into a visit from … Roxane Gay. Will she fit into the office lift? How many steps will she have to take to get to the interview? Is there a comfortable chair that will accommodate her six-foot-three, ‘super-morbidly-obese’ frame?” Freedman wrote in the podcast description.

“I’d estimate there were more than a dozen exchanges back and forth between my producer and her people and the details of them both broke my heart and opened my eyes,” Freedman wrote on the website in a post that has now been deleted, but is still archived. “Her size is imposing and also a logistical nightmare for her. The requirements back and forth with her publishers who had brought her out to Australia to promote her books were extremely detailed.”

The description is clearly written in earnest, but comes off as gawking and completely disrespectful. However, Freedman justified her decision because, hey, Gay herself writes about this too, so this must be OK, right?: “Hunger is a memoir about Roxane Gay’s body. And I would never normally breach the confidence of what goes on behind the scenes while organizing an interview but in this case, it’s a fundamental part of her story and what her book is about.”

Fans and Gay have since reacted to the puzzling posts, sharing thoughts on Freedman’s ignorance on relaying Gay’s experience to the world in a lens that is all but empathetic.

This is not how you talk about another human being, especially your own guest. Nobody should have to tell @mamamia that this isn't OK. https://t.co/Jfx1nrqDgv

"Can she fit into the lift?" Get why Mia Freedman found @rgay requests interesting, but they're private for a reason https://t.co/VI5MkOUQa4

No Filter is apt name for the podcast. Along with No Respect, No Empathy, No Sense. This is perfect eg of #mamamia exclusive faux feminism pic.twitter.com/Ov86pYxyTL

According to Gay, all she asked for was a sturdy chair. She said she never in her life asked if she would fit in an elevator or requested any of the other ridiculous elaborate details allegedly demanded by Gay’s representation: “How many steps were there from the curb to the door of the building? Were there any stairs? How many? How big was the lift and was there a goods lift? How many steps from the lift to the podcast studio?”

Since Monday night’s backlash, Mamamia has pulled the online post, edited the podcast description (though some offensive elements of the podcast intro remain), and issued a statement saying it is “deeply apologetic that in this instance we’ve missed the mark in contributing to this discussion.”

However, Mamamia’s published apology appeared to further support and justify Freedman’s decision to fixate on these details about Gay. She repeats the idea that since Gay writes about this and her publishing team asked for certain accommodations, “the interviewer respectfully raised them with Roxane as an example of what she writes in her book.”

“We felt that this was an important issue that was integral to understanding Roxane’s point of view in the world and helping people learn about and empathize with a perspective they may never have considered—just as she writes in her book,” Mamamia continued. “As soon as we became aware of her feelings about it, we took down the written post, edited the podcast intro and changed the podcast description to remove all references to the questions asked by her publishers and about details she said she found upsetting.”

When asked about her accommodations during the interview, Gay said these experiences are stressful as she wonders if such accommodations will be made to seating and space.

“It’s just a constant series of questions that you are asking yourself every single day before you go into any space, and it’s exhausting because people don’t think, they just assume that everyone fits in the world like they do,” Gay said.

Perhaps next time Mamamia wants to have their readers and listeners “empathize” with someone of a different experience, such as Gay, they should stick to the interview subject’s words and explanations, instead of coloring in a cartoonish, horrific depiction.